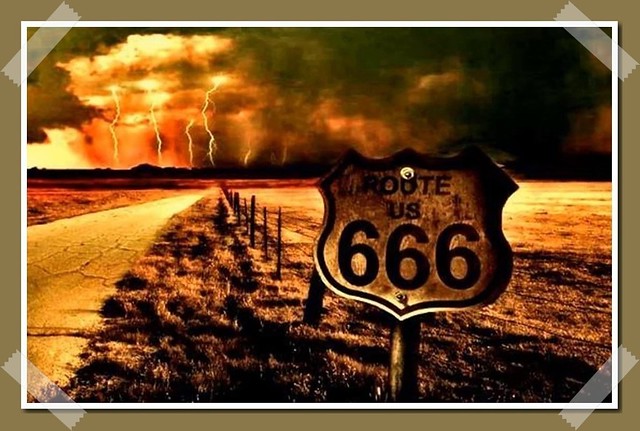 Six-six-six (666) is the number of “the Beast,” or Antichrist, according to interpretations of the book of REVELATION in the Bible. Six-six-six is associated with the Devil and SatanISM.

Revelation is based on a series of apocalyptic visions John of Patmos experienced during his exile on the island of Patmos in the Aegean Sea. In one vision, a beast rises up from the sea. It has seven heads, 10 horns, and 10 crowns; the heads bear the name of blasphemy. One of the heads had a fatal wound but had healed. A voice in the vision says, “Let him that hath understanding count the number of the beast: for it is the number of a man; and his number is Six hundred threescore and six.”

The number would be marked on the forehead or right hand of worshippers. An Angel tells John,

“If anyone worships the beast and its image, and receives a mark on his forehead or hand, he also shall drink the wine of God’s wrath, and shall be tormented with fire and sulphur in the presence of the holy angels and of the Lamb. And the smoke of their torment goes up for ever and ever; and they have no rest, day or night.”

The number 666 has been projected onto many enemies throughout history. Names have been manipulated to add up to the numerical value of 666. Revelation makes reference to Roman emperors who claimed deity, and “Nero Caesar” adds up to 666. The Gnostics were considered great enemies of the church, and some church fathers said the Gnostic Ogdoad was the Number of the Beast. During the Reformation, Protestants called the Catholic Church the Italika Ekklesia and referred to the pope by the Greek word papeiskos in order to arrive at 666, and the Catholics did the same to MARTIN LUTHER. Similarly, the number has been applied to Muhammad, and even to political villains such as Napoleon Bonaparte and Adolf Hitler.

Aleister Crowley often signed his name as “The Beast 666” or “TO MEGA THERION,” which equals “The Great Beast” in Greek, or 666. He associated 666 with the powers of the Sun, not evil. In the Kabbalah, the Sun is the sixth emanation from God. A magical square expressing the Sun adds up to 666. A square composed of 36 squares (6 times 6) contains the numbers 1 through 36 so that any line connecting the numbers, horizontal, vertical, or diagonal, adds up to 111. The sum of all the squares is 666. In 1934, Crowley testified in a lawsuit and was asked about his self-designations of “The Beast 666” and “Mega Therion.” Therion means “great wild beast,” he said, and 666 is the number of the Sun. Crowley said, “You can call me Little Sunshine.”

Throughout history, people look for the Beast in names or things that add up to 666. However, languages and numbers can be manipulated to arrive at 666 for any name. Crowley was able to make his own name add up to 666 by using Hebrew letters and adding his middle initial, E, which he never used otherwise. The number 666 has been so stigmatized that people avoid using it for legitimate purposes.

Because of its associations with the Antichrist, 666 is feared and avoided by many people, especially for addresses and telephone exchange numbers. Fear of 666 is called hexakosioihexakontahexaphobia.