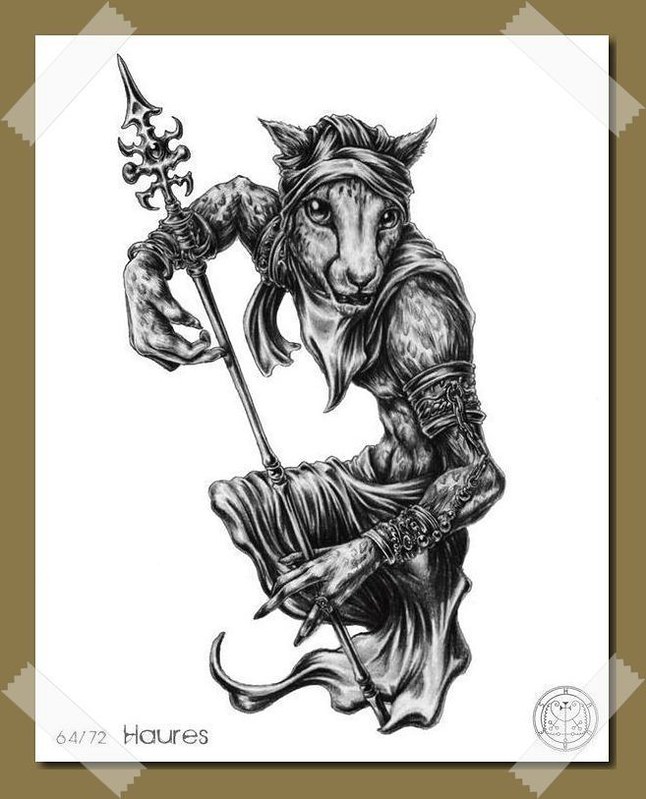 The Demon Haures (Hauras, Haurus, Havres, Flauros) is a Fallen Angel and the 64th of the 72 Spirits of Solomon. Haures reigns as a duke with 36 Legions of Demons under his command.
He appears first as a terrible leopard but, if commanded, will change shape into a man with fiery eyes and a terrible countenance. If invoked into the magician’s triangle, he will give true answers to questions about the past,present, and future; outside the triangle, he will lie.
Haures will talk openly of divinity, the creation of the world, and the fall of the Angels, including his own fall.
He will destroy and burn one’s enemies but will protect those who invoke him from temptation, spirits, and other dangers.

HAURES, or HAURAS, or HAVRES, or FLAUROB. The Sixty-fourth Spirit is Haures, or Hauras, or Havres, or Flauros. He is a Great Duke, and appeareth at first like a Leopard, Mighty, Terrible, and Strong, but after a while, at the Command of the Exorcist, he putteth onHuman. Shape with Eyes Flaming and Fiery, and a most Terrible Countenance. He giveth True Answers of all things, Present, Past, and to Come.
But if he be not commanded into a Triangle, Ò, he will Lie in all these Things, and deceive and beguile the Exorcist in these things, or in such and such business. He will, lastly, talk of the Creation of the World, and of Divinity, and of how he and other Spirits fell. He destroyeth and burneth up those who be the Enemies of the Exorcist should he so desire it; also he will not suffer him to be tempted by any other Spirit or otherwise. He governeth 36 Legions of Spirits, and his Seal is this, to be worn as a Lamen, etc.

Flauros a strong duke, is seene in the forme of a terrible strong leopard, in humane shape, he sheweth a terrible countenance, and fierie eies, he answereth trulie and fullie of things present, past, and to come; if he be in a triangle, he lieth in all things and deceiveth in other things, and beguileth in other busines, he gladlie talketh of the divinitie, and of the creation of the world, and of the fall; he is constrained by divine vertue, and so are all divels or spirits, to burne and destroie all the conjurors adversaries. And if he be commanded, he suffereth the conjuror not to be tempted, and he hath twentie legions under him.

Grand-general of hell and commanding 20 legions, Flauros appeared as a leopard. In human form, he had a frightful face with burning eyes. He knows of the past/present/future, can turn Demons and spirits against the exorcists.

There is a difference in the Legions of Demons Haures commands. In the Dictionnaire Infernal and in the “Pseudomonarchia Daemonum” it is said that he commands 20 legions. S.L. MacGregor Mathers states that he commands 36 legions. Please contact me if you know what causes the difference.