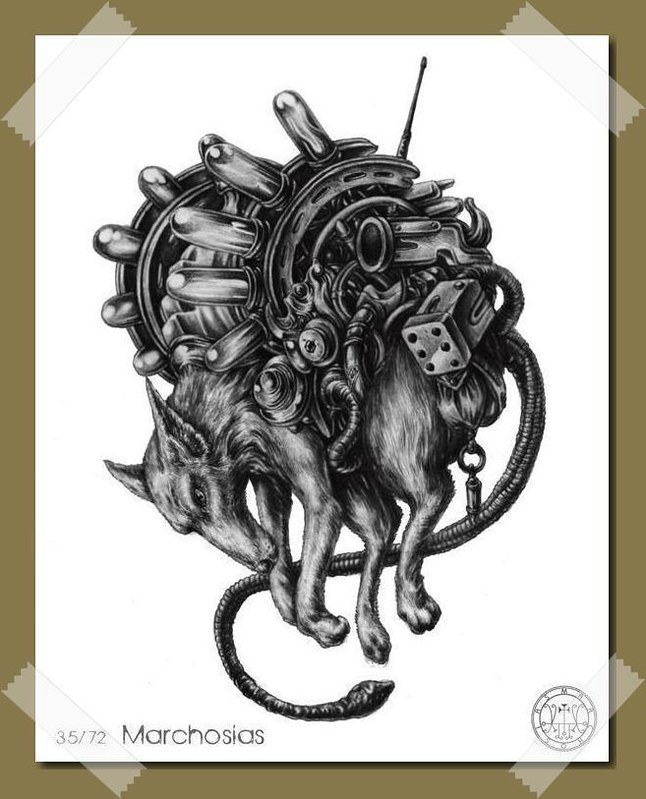 The Demon Marchosias is a Fallen Angel and 35th of the 72 Spirits of Solomon. Marchosias is a marquis ruling 30 Legions of Demons. He appears as a cruel she-wolf with griffin wings and a serpent’s tail, with fire spewing from his mouth. He will take a human form if commanded to do so. He is a strong fighter. He faithfully serves the magician and gives true answers to all questions. Once a member of the angelic order of dominions, Marchosias holds the futile hope that he will return to the Seventh Throne in Heaven after 1,200 years.

MARCHOSIAS. – The Thirty-fifth Spirit is Marchosias. He is a Great and Mighty Marquis, appearing at first in the Form of a Wolf having Gryphon’s Wings, and a Serpent’s Tail, and Vomiting Fire out of his mouth. But after a time, at the command of the Exorcist he putteth on the Shape of a Man. And he is a strong fighter. He was of the Order of Dominations. He governeth 30 Legions of Spirits. He told his Chief, who was Solomon, that after 1,200 years he had hopes to return unto the Seventh Throne. And his Seal is this, to be made and worn as a Lamen, etc.In one Codex of the seventeenth century, very badly written, it might be read “Ox” instead of “Wolf.” – TRANS. [For me he appeared always like an ox, and very dazed.-ED.]

Marchosias [Marchocias] is a great marquesse, he sheweth himselfe in the shape of a cruell shee woolfe, with a griphens wings, with a serpents taile, and spetting I cannot tell what out of his mouth. When he is in a mans shape, he is an excellent fighter, he answereth all questions trulie, he is faithfull in all the conjurors businesse [commands], he was of the order of dominations, under him are thirtie legions: he hopeth after 1200. yeares to returne to the seventh throne, but he is deceived in that hope.