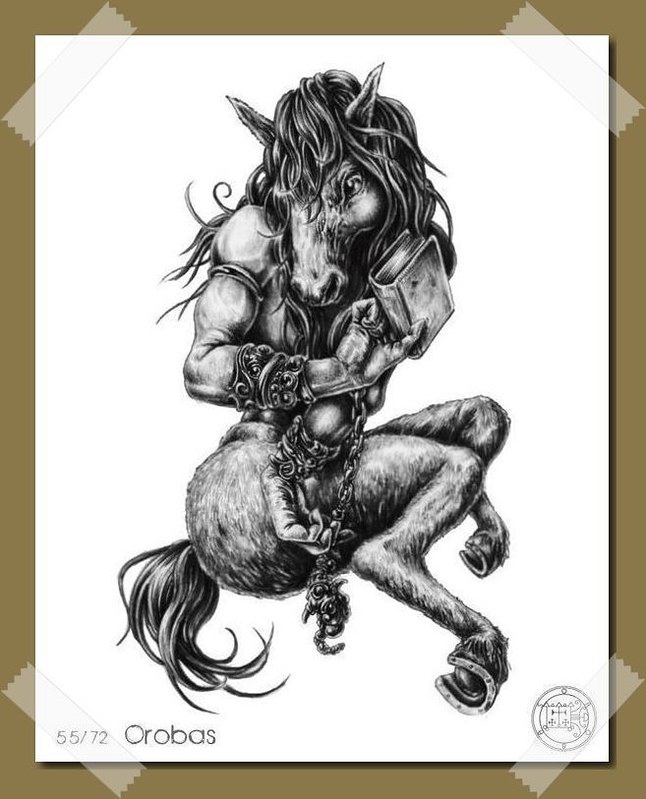 The Demon Orobas is a Fallen Angel and 55th of the 72 Spirits of Solomon. Orobas is a prince in Hell, where he governs 20 Legions of Demons. He makes his first appearance as a horse but then changes to a man upon command. He discovers all things past and present and bestows great favors. He gives true answers to questions about the past, present, and future; divinity, and the creation of the world.
Orobas is faithful to magicians and does not like them to be tempted by any other Demon. Prior to his fall, he was in the angelic order of thrones.

OROBAS. – The Fifty-fifth Spirit is Orobas. He is a great and Mighty Prince,appearing at first like a Horse; but after the command of the Exorcist he putteth on the Image of a Man. His Office is to discover all things Past,Present, and to Come; also to give Dignities, and Prelacies, and the Favour of Friends and of Foes.
He giveth True Answers of Divinity, and of the Creation of the World. He is very faithful unto the Exorcist, and will not suffer him to be tempted of any Spirit. He governeth 20 Legions of Spirits. His Seal is this, etc.

Orobas is a great prince, he commeth foorth like a horsse, but when he putteth on him a mans idol [image], he talketh of divine vertue, he giveth true answers of things present, past, and to come, and of the divinitie, and of the creation, he deceiveth none, nor suffereth anie to be tempted, he giveth dignities and prelacies, and the favour of freends and foes, and hath rule over twentie legions.

High prince of hell, Orobos commands 20 legions. He appears in the form of a beautiful horse or as a man, who speaks of the divine essence. He knows of the past/present/future, can discover falsehoods, grants favors and help, and can reconcile enemies.

This Demon has the unusual quality of complete truthfulness. An honest nature isoften the path to winning the good will of both friends and enemies. Not only does herefuse to lie, but he will not allow the magician to be deceived by others. When Scotwrites of him putting on a “mans idol” he means simply the shape of a human being.Collin de Plancy has combined the two separate forms of this Demon into a single monster that has the head and hindquarters of a horse, but the torso and arms of aman.