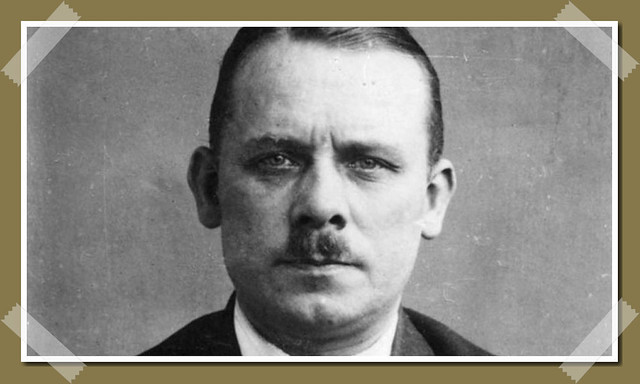 Fritz Haarman (1879–1925) The “Vampire Butcher” of Hanover, Germany. Fritz Haarman was born in Germany on October 24, 1879, to a stern household. He particularly disliked his authoritarian father. Haarman was a poor student, and joined the military, where he fared better.

After the service, he returned home to Hanover, where he was accused of molesting children, and was placed in a mental institution. He escaped and attempted to resume living with his father, but the two fought physically. Haarman then took up a violent, crime-ridden life on the streets. He spent much time in jail.

After release in 1918, he found a job as a butcher, and then as a police informant. He molested boys. His modus operandi was to wake up boys sleeping at the Hanover railway station and demand to see their ticket. If they had none, he would offer them a place to stay for the night. The boys mysteriously “disappeared” after that.

In 1919 Haarman met Hans Grans, a 24-year-old male prostitute, whom he recruited as a lover and as an accomplice to his sex and murder schemes. They selected their victims based upon Grans’s taste for their clothes. In killing the boys, Haarman would bite into their throat at the jugular vein and drink their Blood.

Haarman and Grans went about their grisly business until 1924, when police discovered human remains in the Leine River and along the mud banks. At about the same time, Haarman was jailed on indecency charges. While he sat in jail, police searched his rented room and found bloodstains. The blood was determined to be human,which set police off on a more careful search outside.

They found the remains of 22 corpses. The evidence, however, was circumstantial, and no charges could be brought against Haarman, until a mother of one missing boy identiﬁed a scrap of clothing worn by her son, which was traced to Haarman. Questioned by police, he confessed to murder and named Grans as accomplice. All the victims were between the ages of 12 and 18. Grans would often select the victims.

Haarman would take them to his meat shop, where he also kept his room. He would feed them a generous meal, lavish praise upon them for their beauty, and then turn into a VAMPIRE killer, sexually assaulting them and inﬂicting a fatal bite upon their necks. (If Haarman failed to kill the victims, Grans would beat him.) Grans got some of the victims’ clothes, and the rest were sold through Haarman’s butcher shop.

It appears that some of the victims were sold as meat and sausages as well. A third man, Charles, who was a butcher as well, assisted Haarman in grinding and cutting up the bodies. After one such episode, an unwitting shop patron helped Haarman with the making of the human sausages in the kitchen, which they both cooked and ate on the spot.

In court, Haarman claimed that he was sane, but that when he committed the murders, he was always in a trance and not aware of what he was doing. The court rejected that argument, based upon Haarman’s quite specific description of the manner in which he would have to bite the victims in order to kill them.

Haarman was accused of 24 murders. Some estimated that his actual number of victims was much higher, to 50. Haarman himself opined that he had killed “30 or 40” boys. Haarman was judged to be sane and was executed by beheading in 1925. He asked that his tombstone read, “Here lies Mass-Murderer Haarman,” and that Grans should lay a wreath on his grave every year on his birthday. Charles disappeared, and Grans was sentenced to life in prison.

From: the Encyclopedia of Vampires, Werewolves, and Other Monsters – Written by Rosemary Ellen Guiley -a leading expert on the paranormal -Copyright © 2005 by Visionary Living, Inc.

Back to Famous Vampires