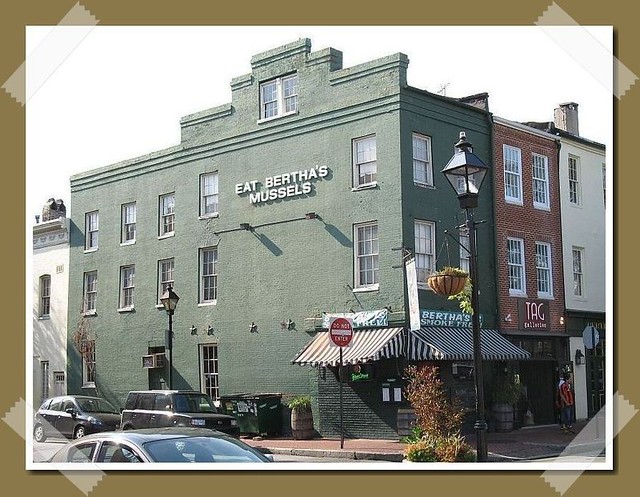 Constructed around 1770, the restaurant known for its famous “EAT BERTHA’S MUSSELS” green bumper stickers has been through many incarnations since Colonial times. Built in Baltimore’s Historic Fells Point (Edgar Allan Poe’s last stop before the afterlife), Bertha’s has been a saloon, a boarding house, an eatery, and even a brothel at one time or another. The atmosphere at Bertha’s is a mixture of progressive art and attitude with a lot of old Baltimore nautical touches thrown in for good measure. Patrons are of all ages and backgrounds, and at any time a table can be hard to come by.

Customers and employees have reported many strange occurrences over the years. One customer reported a man in 19th-century clothing near a downstairs window; another regular witnessed a woman in white descending the staircase from the restrooms upstairs. Employees have seen a woman with a wide-brimmed black hat in a studio upstairs and a child running along a hallway. Dark figures are seen quite often, and many have reported feeling uneasy, sensing they are being watched.

The Maryland Paranormal Investigators Coalition has done a few investigations and workshops there. On one investigation, a woman’s voice can be heard laughing on a recorded EVP. During one of the workshops, a trunk on the second floor near the bathrooms shook and rattled while five people looked on.

Back to Haunted Maryland