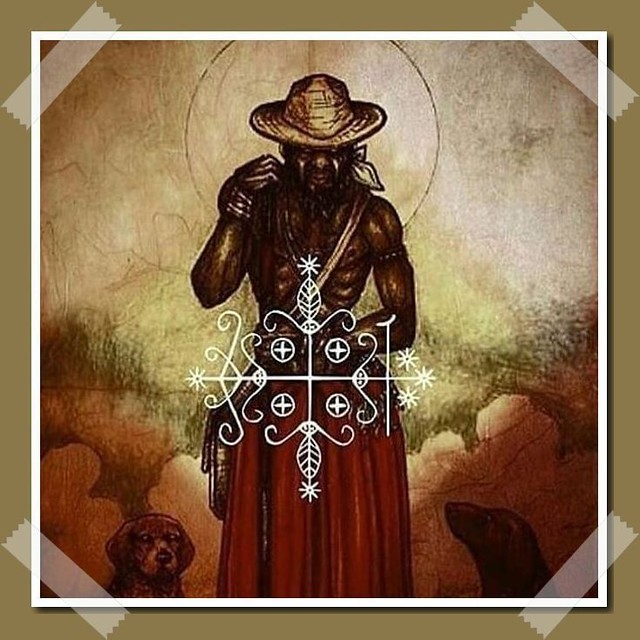 Legba (also Elegguá) Not the oldest, but perhaps the most important, orisha (god) in the African spirit pantheon is called Legba in Vodun and Elegguá in Santería. He is the god of doors and entryways, of gates and paths, of Crossroads, sorcery and trickery. Without his permission, the other gods may not come to earth. He has been identified with St. Peter in the Catholic catalogue of saints, since Jesus Christ gave Peter the keys to the kingdom of Heaven, and like Peter, he serves as the foundation for the cult, or church. He is also associated with a holy guardian angel, St. Michael, St. Martin de Porres or St. Anthony.

In Vodun, Legba is called Papa, or the Father. He is the solar prototype and magical archetype. Vodun worships the sun as a life-giving force, and Legba is the Sun, the Orient, the East, the place where life is created and Magic is controlled. As such, Legba is called Legba-Ji, or “god of the creation.” His cardinal point in the magical cross is the east. He is greeted first when welcoming the gods or mystères, so that he can open the door and let the others enter. Legba-Ati-Bon also represents the “good wood,” or sacred trees of the African jungle, symbolized by the wooden center post, or poteau-mitan, in the Vodun peristyle. The poteau-mitan also acts as a conductor of the spirits into the Vodun ceremonies. Legba forms one-third of the sacred trinity along with Danbhalah-Wedo and Erzulie.

As Legba Grand-Chemin or maitre Grand-Chemin, Legba is guardian of the crossroads and master of the highways. In occult terms, the crossroads symbolize the joining of the astral vertical forces with the horizontal, so Legba controls the astral-causal magic of the gods. Legba, a cosmic axis, conducts the souls of the faithful to union with the mystères and leads the mystères down through the center post to the crossroads to receive the sacrifice of the worshipers. Some Vodunists believe his associations with Crosses make Legba the Vodun Christ. But as master of the crossroads, or maitre Carrefour, Legba also governs sorcery and is the greatest magician.

Drawings of Legba usually depict him as an old man, bent over with age. He is also associated with water bearers, as Legba controls the fluids of the earth, including blood and circulation. Anatomically, Legba represents vertebrae, bones and bone marrow, symbolized by the center post—the backbone of the peristyle. Veves, or symbolic drawings, of Legba incorporate an equal-sided cross. His favorite sacrificial animals are lions and white sheep, his sacred animal is the lizard and his special metal is gold.

In Santería, Elegguá controls all gates and entry-ways, acting as messenger for the gods. After Obatala, father of the gods, Elegguá is the most important; his permission must be gained for any of the other orishas to function. Legends tell that Olorun-Olofi, the creator, was ill, and all the efforts of the orishas had had no success. Elegguá, still a child, asked to see Olorun-Olofi and gave him an herb concoction that cured him within a few hours. In gratitude, Olorun-Olofi decreed that Elegguá was the god to be honored first in ceremonies, and he gave Elegguá the keys to all doors and made him owner of the roads.

Elegguá’s followers keep his image in their houses, prepared by the Santero according to each individual’s temperament and guardian angel. First the Santero gathers earth from a crossroads, an anthill, a churchyard, a hospital, the jail and a bakery, mixing these dirts with herbs sacred to Elegguá, a turtle’s head, a stone from an open field and 29 coins of various denominations. This mixture is then added to cement, which has been moistened with wine, honey and omiero, a sacred herbal liquid used in initiation ceremonies. Next the Santero forms Elegguá’s head, using seashells for the eyes and mouth.

After the cement dries, the Santero buries the head before sunrise at a crossroads to allow Elegguá’s spirit to enter and animate the statue. Seven days later, the Santero disinters the head and fills the empty hole with three roosters, whose blood is sprinkled around the inside. Also into the hole go bananas, corn, candies and some of Elegguá’s favorite foods, like coconut. He then generously sprinkles rum over the contents and fills the hole with dirt. Back at the house, the Santero sacrifices a mouse or goat; if neither of these animals is available, he substitutes a black chicken. The sacrifice consecrates the statue, and it becomes Elegguá with all his attendant powers.

Devotees keep Elegguá in a small cabinet near the front door. Every monday, and on the third day of the month, the statue is removed and exposed to the sun for a few hours before noon, then anointed with a special grease called manteca de corojo and replaced in the cabinet. The devotee pours a little bit of water three times on the floor in front of the image and then fills his mouth with rum and sprays the stone with it. Next the devotee lights a cigar and blows smoke in Elegguá’s face, as the orisha loves cigars, then leaves the lighted smoke by the statue’s side. Next, the devotee feeds Elegguá some small pieces of smoked opossum, some coconut and a few grains of corn along with candy. The devotee customarily tells Elegguá—or any orisha, for that matter—what foods he or she is offering the god. A candle is lit by the cabinet door, which is open all day; then the devotee asks Elegguá’s protection and help in acquiring a better job, more money or better luck.

Elegguá has 21 different manifestations, some beneficent and some devilish. The oldest Elegguá is Elufe, whose image is carved from a wide, flat stone and kept in the backyard. The guardian Elegguá of cemetery doors is Anagui, who also distributes and adjudicates the work of the other Elegguás. Alaroye lives behind the doors and counts the goddess Oshun among his good friends. Ayeru is messenger to the god Ifá and protector; Baraine is messenger to the god Changó.

But the personae most feared are the Eshus or Echus, considered by many to be incarnations of the Devil. The Eshus live in darkness; on St. Bartholomew’s Day, August 24, the Eshus roam the streets and create as much trouble as possible. As a best friend of the God Oggun, Elegguá is called Eshu Ogguanilebbe and is responsible for automobile accidents and railroad derailments. Whenever Oggun is hungry, this Eshu either kills a dog or causes an accident so that bloodthirsty Oggun may feast. Eshu Oku Oro controls life and death, and Eshu Bi is the king of mischief and stands in corners. Eshu Alayiki brings the unexpected. The colors red and black symbolize all the Elegguás.

Many Santeros believe the dark Eshu represents all 21 of Elegguá’s personalities. These manifestations of Elegguá fit the Brazilian concept of Exus, horned gods often mistaken for the Devil, who symbolize nature’s primal forces. The Exus act as messengers to the gods and are responsible for the world’s mischief and trickery. No ceremony in Brazil begins without first asking the Exus for protection and permissions to call on the other gods. Evil spells, or despachos, need the Exus’ help to succeed, and the practitioners of Quimbanda, or black magic, worship Exu’s worst personalities: Exu mor (death), Exu of the Crossroads and Exu of the Closed Paths.

Legba is the affectionate name by which the West African spirit Eshu Elegbara is often called. Eshu Elegbara appears in the mythologies of various West African people under very similar names (basically all variations on the same name). In Dahomey, he is specifically called Legba.

In Fon cosmology, Legba is the youngest of the Creator Mawu-Lisa’s twelve children. The original intent was to divide the universe between these twelve but it was apportioned in order of birth and so by the time it was Legba’s turn, nothing was left. Mawu-Lisa compensated him by appointing him messenger and mediator between spirits and humans. Legba sees all; hears all and knows all. It is crucial to keep him happy and propitiated because otherwise he will not relay messages to the spirit world or may even deliberately mess them up.

Iconography: Legba is depicted as a giant, thrusting phallus