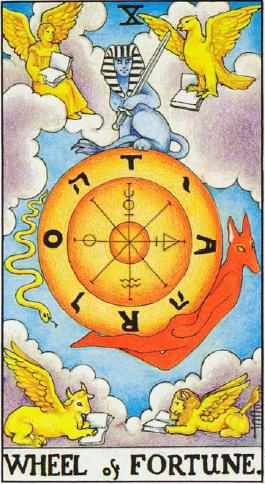 The Wheel of Fortune (X) is the tenth trump or Major Arcana card in most traditional Tarot decks. It is used in game playing as well as in divination.

The Wheel Of Fortune card, like other cards of the Major Arcana, varies widely in depiction between Tarot decks. Basically, this card has been modeled ever since the tarot's inception in the 15th century after the medieval concept of Rota Fortunae, the wheel of the goddess Fortuna. Images generally show a six- or eight-spoked wheel, often attended or crested by an individual (sometimes human; sometimes a Sphinx-like half-human) attired in an Egyptian-style headdress. In some decks, such as the AG Müller, the wheel is also attended by an individual wearing a blindfold; and often there are people sitting or riding on the wheel whilst others are shown falling from it. The Wheel of Fortune was a common allegorical symbol in European iconography. The four figures shown either climb, are at the summit, or fall, or at the bottom of a revolving wheel presided over by personified Fortuna.

The wheel is not always shown inscribed with any lettering. Where this is the case, the letters T-A-R-O can often be found aligned against four of the spokes, which can also be interpreted as R-O-T-A, the Latin word meaning “wheel”. The letters on the wheel were intended by Waite to mean “Rota Taro Orat Tora Ator,” which translate to The Wheel of Taro[t] speaks the Law of Ator. In some decks, such as the Waite, the wheel is also inscribed with additional alchemical symbols representing the four elements of Earth, Air, Fire and Water (which are also said to be represented throughout the Tarot by the four 'suits' of Pentacles or Discs, Swords, Wands and Cups respectively. These emblems can also be seen on the Magician's table in the Magician card (Card I)).

On the Waite card shown, though not necessarily on others, there are also four winged creatures in the corners of the card, representing the symbols of the four Evangelists (The Lion, the Ox, the Man and the Eagle) and the four astrological signs (Leo, Taurus, Aquarius and Scorpio. The numbers of these animals add up to 26, the number of IHVH. The Hebrew letters IHVH (Yod Heh Vau Heh) are in the outermost ring of the Wheel, interspersed with the letters TORA. IHVH represents the unpronounceable name of God. The snake descending on the left side of the Wheel is the Egyptian god Typhon, the god of evil. The snake also represents the life force descending into the material world. The Anubis rising on the right side of the Wheel is Hermes, a symbol of intelligence or wisdom ascending.

According to the way in which we approach our destiny, we experience the Wheel of Fortune either as an expression of our powerlessness and helplessness or as an indication of a knowledge of life through which we can grow and mature. On the level of events, the Wheel actually often shows situations over which we have no influence at first. The downswing of the Wheel then means that our plans simply don't work out. The weather, the traffic, an air traffic controller's strike, the malice of an object, or some other “higher power” ruin our plans. The Wheel then shows us that the time has not (yet) come to put our plans into effect. This card in the other positions can be a valuable indication of how we can get to the other, ascending portion of the Wheel. It stands for a happy, pleasant, even surprising turn of events.

Through its cross sum (the sum of the digits), it is closely connected to The Magician and The Sun (cards 1 and 19 of the Major Arcana respectively). Each represents a break with the previously established order: the Magician starting the journey; The Wheel of Fortune introducing random chance; and The Sun reborn from the underworld.
Opposing cards

With Jupiter as its ruling planet, the Wheel of Fortune is all about luck, change, and fortune. Almost always good fortune. Almost every definition of this card indicates abundance, happiness, elevation, or luck; a change that just happens, and brings with it great joy.
If you've been struggling with a problem or tough situation, this card can signal that you will find the answer if you stand back and view everything from a larger perspective.

The Wheel of Fortune also represents unexpected encounters and twists of fate. You can't predict surprises; you can only be aware when one is circling around. Indeed, Card 10 often suggests wheel-like actions – changes in direction, repeating cycles and rapid movement. “Round and round and round she goes, and where she stops, nobody knows.”

When the Wheel of Fortune is reversed, it tends to mean that you may experience a bad run of luck, setbacks or finally suffering the consequences of a bad decision or a bad act on your behalf. It can also means that you resist the changes that are occuring in your life.

In the Mythic Tarot deck, the Wheel of Fortune is depicted by the Fates.

I walked along, absorbed in deep thought, trying to understand the vision of the Angel. And suddenly, as I lifted my head, I saw midway in the sky a huge, revolving circle covered with Kabalistic letters and symbols. The circle turned with terrible velocity, and around it, falling down and flying up, symbolic figures of the serpent and the dog revolved; above it sat an immovable sphinx.
In clouds, on the four quarters of heaven, I saw the four apocalyptical beings, one with the face of a lion, another with the face of a bull, the third with a face of an eagle, and the fourth with the face of a bull. And each of them read an open book.
And I heard the voices of Zarathustra's beasts:–

“All go, all return,”–the wheel of life ever turns. All die, all flourish again,–the year of existence runs eternally.
“All perish, all live again, the same house of existence is ever building. All separate, all meet again, the ring of existence is ever true to itself.
“Existence begins at every moment. Round each “here” rolls “there”. The middle is everywhere. The way of eternity is a curve”.
The Symbolism of the Tarot by P D. Ouspensky (1913)

Cyclomancy is the art of divination by revolving objects such as turning/spinning a wheel. Etymology From Greek kyklos, a circle. History Dating from time immemorial,…

Death (XIII) is the thirteenth trump or Major Arcana card in most traditional Tarot decks. Iconography The Death card commonly depicts a skeleton riding a…

The World (XXI) also called The Universe is the final card of the Major Arcana in the Tarot deck. Iconography A naked woman hovers or…