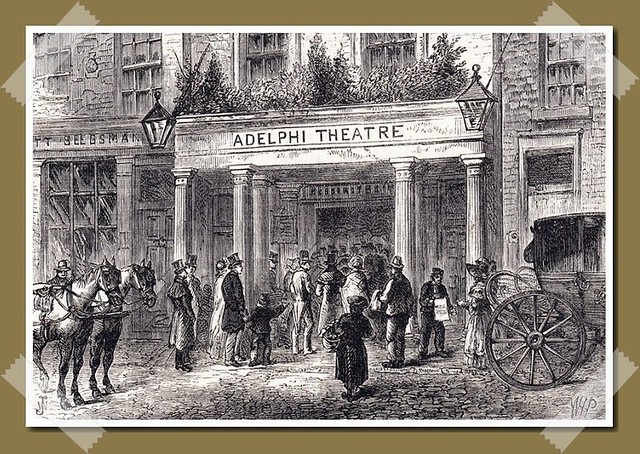 Adelphi Theatre London theater said to be haunted by the ghost of William Terriss, a popular Victorian actor who was murdered there by a jealous rival.

The murder occurred on December 16, 1897, during the run of Secret Service, a thriller starring Terriss and his mistress and leading lady, Jessie Milward. Also in the production in a minor role was actor Richard Arbor Prince, who apparently harbored a great jealousy and growing hatred of Terriss. Finally, Prince went out and bought a dagger, intending to kill Terriss.

Early in the evening of the fateful date, Prince ambushed Terriss as the leading man unlocked the Adelphi stage door in Maiden Lane. Terriss expired dramatically in Milward’s arms, whispering, “I’ll be back.” Prince was tried and convicted of murder but was found insane. He spent the rest of his days at an institution for the criminally insane. He died in 1897 at age 71.

The presence of Terriss’s ghost was not reported until 1928. A stranger in town, who did not know about Terriss’s murder, saw a male figure dressed in gray Victorian clothes in Maiden Lane. The figure vanished suddenly, and the witness concluded he had seen a ghost. He later identified the figure as Terriss from a photograph.

Also in 1928, Poltergeist phenomena manifested in the dressing room once used by Milward. A leading comedy actress known as June felt light blows on her arms, a sensation of being grasped, and the inexplicable shaking of her chaise longue. She also witnessed a greenish light above her MIRROR, and heard two taps that seemed to come from behind it. Later she learned that Terriss had been in the habit of tapping Milward’s dressing room door twice with his cane whenever he passed it.

In 1956, Terriss’s ghost reportedly was drifting around the Covent Garden Underground Station, dressed in a gray suit, old-fashioned collar, and white gloves. The ghost frightened witnesses. A spiritualist held a Séance at the station and produced a sketch that bore a remarkable resemblance to a photograph of Terriss.

The greenish light was reported as late as 1962, when night workmen saw it take the shape of a man and fl oat across the stage. The ghostly figure opened the stage curtains and then proceeded into the stalls, tipping the seats as it went. See Theatre Royal.

The Theatre Royal, Drury Lane, is the oldest theatre site in London (save the rebuilt Globe), the original theatre having been built in 1663. It…

“Theater people” are a very special breed. While some people only devote themselves to an occasional production, others make it their life. And in some…

Princess Theatre is a large theatre sitting in the Victoria capital of Melbourne. Built in 1864 by actor Charles Coppin, it is often seen as…