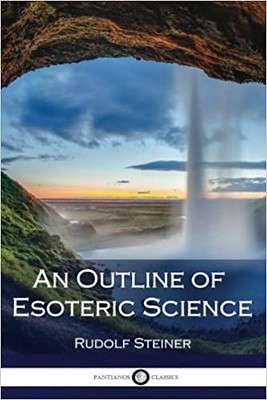 Rudolf Steiner‘s superb thesis provides deep insight into spiritual science, and the history of mankind as viewed through the philosophy of the anthroposophy movement he founded.

An Outline of Esoteric Science attempts to reconcile mankind’s spiritual being with the scientific exactitude which had emerged among scholars in the 19th century. Steiner lays out the spiritual realms which are invisible to us, attempting to use a defined precision similar to that which had emerged in science. He describes several distinct races instrumental in the spiritual growth of humankind, and the incorporeal beings which have contributed to the development of the species.

In the final section, this book refers to the spiritual development and contemplation necessary for individuals to see the spiritual realms and planes which comprise existence and the universe. The means by which individuals may train themselves introspectively to see are detailed by Steiner, whose theosophical philosophy was, by the time of this book’s publication in 1909, well-developed.

Today, Rudolf Steiner is revered for his philosophical views, whereby he advocated individualism used in an ethical fashion with a view to spiritual development. An Outline of Esoteric Science is to some extent contrasted with the evolutionary science of Charles Darwin, in that it proposes that humankind evolved spiritually, as well as naturally in the environment. Although Steiner’s views hold little currency in the mainstream scientific establishment, they are popular in occultist and spiritualist circles to this day.