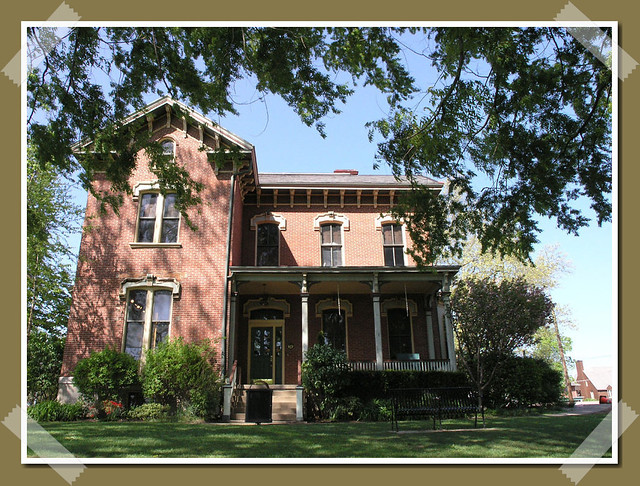 “Amanda’s ghost has been around as long as this place has been a library,” said Sharon Helfrich, director of the Bayne Library. “It’s just a case of different sightings here and there. And she seemed to be very active right around the time that our Lone Sentinel was dying. I think it’s probably because part of the trust is that no tree in the park is allowed to be touched. Trees and nature and things like that were very important to her.”

The Lone Sentinel was a 300-year-old giant elm that graced the library’s property right up until tree surgeons had to remove it in 1998 due to excessive decay.

Amanda Bayne was born in 1846 to Andrew and Mary Anne Bayne. Andrew Bayne owned several acres of land north of Pittsburgh—land that became a precious commodity as the city of Pittsburgh rapidly expanded. Bayne gave his two daughters some land upon which to build their own homes.

In 1870, Amanda married a prominent local architect named James Madison Balph. Balph set to work designing and building his dream house, and, in 1875, the building that would go on to become the library was completed. The home is a stately three-story brick Victorian mansion that sits on a hill overlooking what is now a two-acre park.

Amanda was widowed in 1899 and lived out her remaining 13 years in the mansion. She had a vast collection of books and adored looking out her bedroom window at the majestic elms on her property. When she died in 1912, her will stipulated that her home and property would be donated to the town so long as they promised to use the building as a library and to never harm the elm trees.

Ghost sightings and strange sounds have been reported for decades at the library—the sounds of footsteps walking across the second floor when there was no one in the library above the first floor, strange numbers being typed on the computers by unseen forces, and lights being turned on and off, especially in the attic.

A portrait of Amanda Bayne Balph hangs over the fireplace near the library’s charge desk, so the staff and patrons there know what she looks like. One staff member actually saw Amanda behind her one day in the late 1990s.

“I’ve only seen her once,” said Linda Momper, assistant director of the Bayne Library, who has worked there since 1993. “I was in the library by myself and was turning on the computers, and I looked up at the window and saw a reflection in there of a woman. I looked behind me and I thought, ‘Who’s in here?’ but nobody was there, and I looked again and I saw the reflection again. It looked just like her picture.”

The Butte-Silver Bow Archives is a treasure trove of artifacts from these famous mining towns. Even the building itself is a relic—originally the Quartz Street…

This location is one of the most active in all of Wilmington. Prior to a house being built on the site in 1843, the property…

If you live in, or around, the Northumberland County area of Pennsylvania, you may have heard of the legend of Sleepy Hollow. There is no…

Once known as the Southern White House, the Hermitage was home to Andrew Jackson and his wife, Rachel. When she passed away on December 22,…