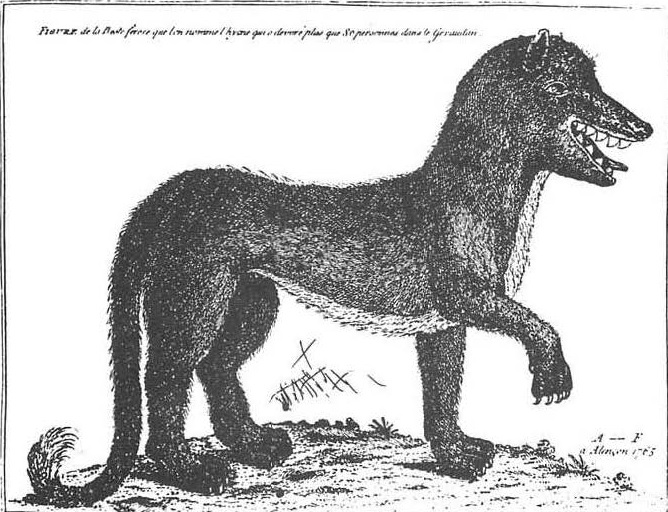 The Beast of Gevaudan is shown in an illustration made during the time of the mystery attacks. (FPL)

In the mid-1760s the ravages of a large, ferocious animal sent panic through a mountainous area of south-central France known as Le Gevaudan. The creature was described in a contemporary account as “much higher than a wolf, low before, and his feet are armed with talons. His hair is reddish, his head large, and the muzzle of it is shaped like that of a greyhound; his ears are small and straight; his breast is wide and gray; his back streaked with black; his large mouth is provided with sharp teeth.” Thought by many terrified peasants to be a loup-garou (“werewolf”), it left the bloody remains of many men, women, and children in its wake.

The panic began in June 1764 with the killings following in July. As the slaughter went on, the story spread that the creature could not be brought down by knife, lance, or bullet. Hunters reported shooting it at close range, only to watch it run away to reappear elsewhere soon afterward.

Eventually, King Louis XV sent a cavalry troop to the region. The soldiers observed the “beast of Gevaudan” on several occasions and managed to fire on it. Though it escaped each time, the depredations gradually stopped, and the soldiers, concluding that the animal had died of its wounds, departed. Soon, however, it was back.

Lured by a big reward posted for the killing of the beast, hunters scoured the countryside. Some saw the creature and swore they had wounded it. Others killed any wolf that crossed their paths. Nothing seemed to work. As the panic spread, entire villages were abandoned. By now the episode had become an international sensation. The English periodical St. James’s Chronicle was not alone in speculating that some “new Species” neither wolf nor tiger nor hyena had been set loose in the French provinces.

By the time it was brought down, on the evening of June 19, 1767, the beast of Gevaudan had slain some sixty persons, many of them children who had been guarding their parents’ sheep flocks. The man who killed it, Jean Chastel, a member of a hunting party organized by the Marquis d’Apcher, used silver bullets in the belief that the creature was a loup-garou. When the animal’s stomach was opened, it was found to contain a small child’s collar bone.

The creature’s death caused understandable jubilation in the afflicted peasant communities. The hunters who had run it down paraded its putrefying remains through the region for the next two weeks before delivering it to the royal court in Versailles. By this time it stank so badly that the king ordered it to be disposed of immediately. Buried in an unknown location, the remains have never been recovered, sparking more than two centuries of speculation about the creature’s identity.

In 1960, after studying a notary report prepared by two surgeons who had examined the carcass in the 1700s, one authority determined that the creature’s teeth were purely wolf-like. But during the summer of 1997, discussion of the fur of the Beast of Gevaudan resurfaced. Franz Jullien, a taxidermist at the National Museum of Natural History in Paris, discovered that a stuffed specimen similar to the Beast of Gevaudan that had been shot by Jean Chastel had been kept in the collections of the museum from 1766 to 1819. It had been definitely identified, a fact that all researchers had overlooked. It was a striped hyena (Hyaena hyaena).

Novelist Henri Pourrat and naturalist Gerard Menatory had already proposed the hyena hypothesis, based on historical accounts, since Antoine Chastel (Jean Chastel’s son) reportedly possessed such an animal in his menagerie, a hypothesis now supported by a zoologist’s identification. While Jullien’s rediscovery must be congratulated, questions remain about the role of the Chastels as creators of a false story involving an escaped hyena in order to cover the rumors of one of the Chastels being a serial killer.

Reports of the Beast of Gévaudan date back to 1764 when in a south-central portion of France, a wolf-like creature massacred defenceless civilians. The first known encounter with the creature was when a young woman, when tending to her livestock, saw the creature approaching. Her dogs, the woman’s only protection, were quickly scared off. The beast, described as the size of donkey, was pushed away by the cows. Using their horns, the livestock was able to save the woman.

After the first encounter, the creature began to kill woman and children. In over sixty cases, the heart and vital organs were torn out. As the attacks increased in brutality, peasants began to speculate the creature was actually a loup-garou (werewolf). Reports of the creature looking through windows in the dead of night began to circulate as the fear of the darkness grew. Many feared to leave their home.

After a brutal and public attack on two young children, help was requested from the Royal Court of Versailles. King Louis XV quickly sent a large crew of troops, under the leadership of Captain Duhamel, to the area. As the troops were stationed in the town, they came in contact with the creature several times, but were unable to kill it. To lure the creature, several soldiers dressed as woman on the assumption that it favoured “easier” prey. As time went on, the killings stopped and the troops returned to their home base.

After the troops had left, though, the killings resumed. Soon, a large reward was posted for the death of the beast. Hunters came in droves and in a very short time over a hundred wolves were killed. During this time, the killing of children seemed to increase in quantity and brutality.

In June 1767, Marquis d’Apcher brought together several hundred hunters and trackers. Splitting into groups, the men searched the country in search of the beast. Jean Chastel, who had loaded his weapons with silver bullets, confronted the creature and fired two shots. The second shot hit the creature in the heart and killed it instantly. After the creature was gutted, the remains of a small girl were found inside its entrails. For several weeks the carcass of the gigantic creature was hauled around the countryside to celebrate its death.

Later investigations proved the events described did happen- and the creature was a wolf. Cryptozoologists confirmed the reports by using surgeon’s reports as a basis.

From July 1764 to June 1767, a pair of large and unusually colored man-eating wolves attacked and killed 60 to 100 people or more in Gevaudan, causing a widescale panic.

Using modern biology and history to investigate a series of grisly deaths in the countryside of 18th-century France. Something unimaginable occurred from 1764 to 1767…

The Beast of Cannock Chase is back – and on the hard-shoulder. Motorists on Junction 10A of the M6, near Cannock, jammed Highways Agency helplines…