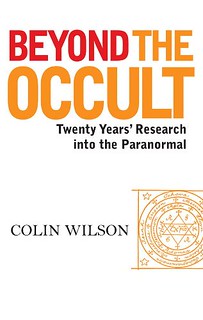 Colin Wilson has explored the paranormal universe ever since he researched his first highly successful work, The Occult: “the most interesting, informative and thought-provoking book on the subject.”* Now, 20 years later, he offers an even wider examination of the mystical and paranormal. And what he has produced is amazing—a thoroughly convincing general theory of the occult.

Wilson powerfully posits that our so-called “normal” experience may in fact be subnormal, and that evolution has brought us near the edge of a quantum leap into a hugely expanded human consciousness. Combining fascinating glimpses into the paranormal world with the latest scientific thinking on the nature of “physical reality,” he reveals the usually unseen powers of the human mind and discusses why he has become convinced that disembodied spirits do exist.

In this classic book on UFOs, bestselling author Colin Wilson, a renowned authority on the paranormal, examines the evidence and develops a definitive theory of…

Colin Wilson’s classic work is an essential guide to the mind-expanding experiences and discoveries of the occult in the 20th century. He produces a wonderfully…

Crashing noises and disembodied voices, coming from nowhere and everywhere at once. Invisible tormentors slapping and pinching and pulling hair. Fires starting spontaneously, pools of…

Throughout human history, thoughts, values and behaviors have been colored by language and the prevailing view of the universe. With the advent of Quantum Mechanics,…