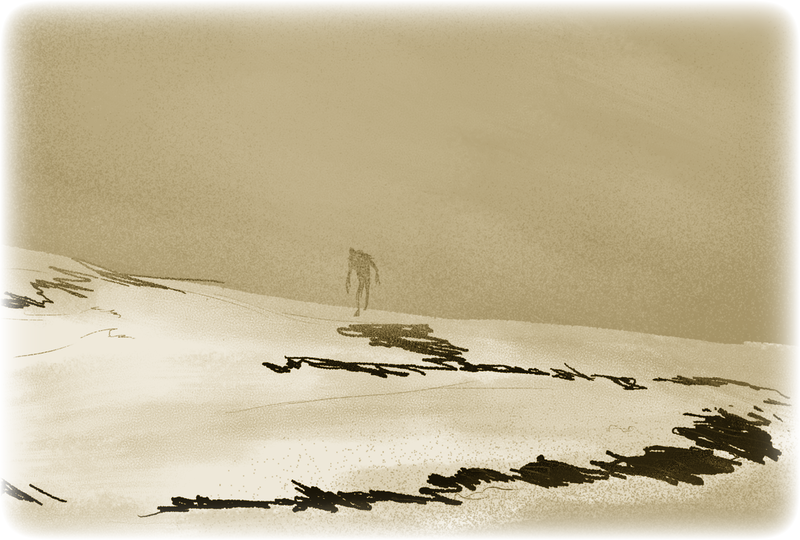 The summit of Ben Macdhui in the Cairngorm Mountains, Grampian, Scotland.

In 1891, Norman Collie was returning from the summit when he heard the crunch of footsteps behind him. For every step he took, he heard another crunch, as if someone had a stride three or four times the size of his own. He ran downhill the last few miles.

In 1942, Sydney Scroggie was camping out at the Shelter Stone by the Garbh Uisge on Ben Macdhui when he saw a tall, stately figure taking deliberate steps across the burns flowing into Loch Avon.

On December 2, 1952, James Alan Rennie photographed a series of tracks in the snow in a straight line on the mountain. Each print was about 19 inches long and 14 inches wide, with a stride of 7 feet. At one point, the tracks jumped a road over a distance of 30 feet.

(1) The Brocken spectre is the giant shadow of an observer cast on a wall of white mist and often surrounded by one or more concentric rings of colour (the “glory”) centred on the figure’s head. However, this optical
effect does not seem to be what hikers have been reporting.

Seileag : Freshwater Monster of Scotland. Etymology: From the Gaelic an t-Seileag, a feminine diminutive derived from the name of the loch. Variant name: Shiela.…