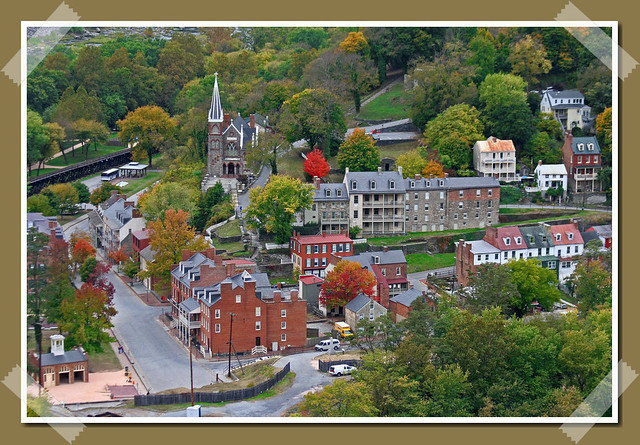 Harpers Ferry This small town in West Virginia was the scene of pre–American Civil War (1861–65) fighting that led to the arrest and execution of famed slavery abolitionist John Brown. Numerous Ghosts haunt the town.

Harpers Ferry seems today like a small and sleepy place, but in the 19th century its armory, arsenal and rifl e works gave it importance. Its location, at the confl uenceof the Potomac and Shenandoah Rivers at the base of the Blue Ridge Mountains, also gave it strategic value. A rail line linked Harpers Ferry to Washington, D.C., 55 miles away.

Violence came to Harpers Ferry prior to the outbreak of the war, as tensions were building over slavery. The radical abolitionist John Brown of Kansas stormed around the country inciting fighting. Brown was so impassioned in his opposition to slavery that even his supporters considered him a madman. In art, he was often portrayed with wild-looking eyes, hair standing on end and fire shooting from his mouth.

In 1859, Brown conjured a scheme in which he and a band of followers would seize control of the arsenal in Harpers Ferry (then part of Virginia) and would arm slaves throughout the region. Brown believed that slaves would fl ock to Harpers Ferry and join his army.

On October 16, Brown and 15 recruits, including his sons and four black men, staged a surprise attack on the arsenal, taking control of it and several buildings. They took hostages, including the great-great nephew of George Washington. But instead of triumph, they met disaster.

Brown’s men killed the town’s baggage master, who was a freed slave. Angry townspeople surrounded the firehouse where Brown was encamped. In exchanges of gunfire, one of Brown’s men, Dangerfield Newby, a former slave, was killed. He was either shot or stabbed in the throat and bled to death. His ears were cut off for souvenirs, and his body was dumped in an alley where hogs were kept. Hogs fell upon the corpse and nearly devoured it.

Colonel Robert E. Lee, who later would become general of the Confederate army, sent militia to Harpers Ferry. The fight was over quickly. Nine of Brown’s men died, including two of his sons. Brown was wounded and arrested. He was tried and convicted of treason against the state of Virginia and for conspiracy to incite insurrection. On December 2, 1859, he was hanged in Charles Town.

For a man of fiery temper and vitriol Brown had no final words on the gallows. He left only a note that said he was “now quite certain that the crimes of the guilty land will never be purged away but with blood.”

According to lore, Brown’s eyes continued to shine with a wild light after he was dead, horrifying onlookers. Candle wax was poured over them.

Harpers Ferry was still part of Virginia when the Civil War began in 1861. Virginia seceded and joined the Confederacy, establishing its capital in Richmond. Not all of the residents in Harpers Ferry and other western parts of Virginia were pleased by this. Many did not own slaves and felt no vested interest in defending slavery. Opposition to the Confederacy led to the formation of a new state, West Virginia, which immediately applied to be part of the Union. The U.S. Congress approved it, and West Virginia was ratified as a new state.

During the course of the war, the city changed hands between the Confederates and Union several times, and the railroad bridge was destroyed and rebuilt nine times.

Many of the ghosts are related to Civil War–era fighting, but others relate to earlier legends and to folk beliefs imported with the immigrants who settled there.

Ghosts lurk in the small and quaint streets of Harpers Ferry. John Brown’s tall, thin ghost is reported seen at the site of his raid, sometimes accompanied by a large black dog. They vanish through the closed firehouse door. According to lore, people sometimes see a man who resembles Brown walking about town during daylight. They take his photograph, even pose for photographs with him, only to have no image of him show up on the negative.

Dangerfield Newby, showing a gashed throat and wearing the slouch hat and baggy trousers he wore the day he died, walks about Hog Alley, located between High and Potomac streets.

Ghostly Civil War soldiers light campfires in the mountains around Harpers Ferry, especially on South St. Peter’s Mountain. Other phenomena include smoke, the smell of sulfur and the sound of cannons exploding and bayonets clashing.

The music, drumming and sounds of a marching parade sometimes fill Ridge Street. The haunting is believed to be that of troops stationed in Harpers Ferry in 1799 to await transport to France to assist in possible war there. The troops filled their time by marching up and down the streets to drums. The threat of war passed, and many of the soldiers stayed and settled in Harpers Ferry.

St. Peter’s Church, located above the town on a hill, is one of the city’s favorite haunted sites. According to lore, the church, accessible from town by steep steps, was saved during the Civil War by its quick-thinking priest, Father Costello, who raised a British fl ag whenever fighting broke out. Both armies avoided shelling the church in order not to create an international dispute.

In the evenings, a ghostly priest wearing a black friar’s hat can sometimes be seen leaving the rectory and walking toward the church, where he disappears through the walls. Another ghost is that of a wounded soldier taken to the churchyard for medical help. He slowly bled to death and was near his end when taken inside the church. “Thank God, I am saved,” he is said to have mistakenly declared. His voice still whispers, “Thank God, I am saved,” on some nights when visitors enter the church.

Back to Haunted West Virginia