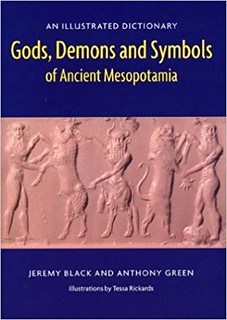 Ancient Mesopotamia was a rich, varied and highly complex culture whose achievements included the invention of writing and the development of sophisticated urban society.

This book offers an introductory guide to the beliefs and customs of the ancient Mesopotamians, as revealed in their art and their writings between about 3000 B.C. and the advent of the Christian era. Gods, goddesses, demons, monsters, magic, myths, religious symbolism, ritual, and the spiritual world are all discussed in alphabetical entries ranging from short accounts to extended essays.

Names are given in both their Sumerian and Akkadian forms, and all entries are fully cross-referenced. A useful introduction provides historical and geographical background and describes the sources of our knowledge about the religion, mythology and magic of “the cradle of civilisation”.

Folklore emphasizes those bodies of North American and European scholarship that have influenced each other most profoundly since the discipline’s inception. The entries provide an…

Explores the history and culture of Ancient Mesopotamia. Eye-catching photos, fascinating sidebars, and a “”Contributions”” special feature guide readers through the rise and fall of…

In Mesopotamian myth, Anšar and Kisar were a pair of primordials, respectively male and female, and perhaps representing the heaven (An) and earth (Ki). According…

The ancient civilization of Mesopotamia thrived between the rivers Tigris and Euphrates over 4,000 years ago. The myths collected here, originally written in cuneiform on…

The Mesopotamian Gods and Demons are presented and restored to the ancient knowledge and power for the modern Luciferian ideology as defined by Michael W.…