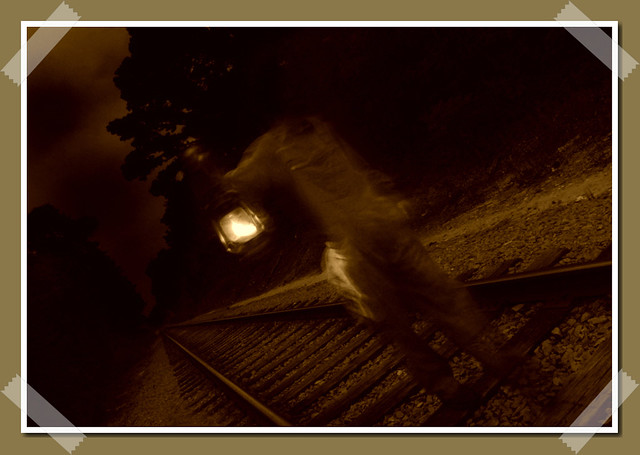 Joe Baldwin – In American folklore, a train conductor who was decapitated when his train was rammed by another train. The story dates back to 1867. In that year Joe Baldwin was a conductor for the Atlantic Coast Railroad line, and his job involved riding in the last car of the train.

One night, as the train was steaming along, he realized that his car seemed to be slowing down. He realized that it had become uncoupled and there was another train following behind. He was sure he would crash into the slowly moving car. Joe ran out onto the rear platform of the car and started wildly waving his signal lantern, trying to get the attention of the engineer of the train behind him. The engineer failed to see the lantern and continued on, finally crashing into the car where Joe had remained at his post. The coach was completely demolished, and Joe was killed, his head severed from his body.

A witness reported that Joe stayed where he was, waving the lantern, through the entire wreck. Just seconds before the engine collided with the car, Joe’s lantern was hurled away as if by some unseen but mighty force. It hit the ground and rolled over and over again, finally coming to rest in a perfectly upright position. His lantern is said to still glow on certain nights, preventing train disasters.