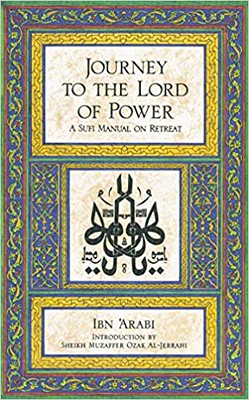 Journey to the Lord of Power is the first English translation of Ibn ‘Arabi’s twelfth-century text dealing with spiritual ascent. ‘Arabi, whose metaphysical teachings have had a profound influence on both the Muslim and Christian worlds, is known as one of the greatest writers of mystical love poetry of all time.

Written in answer to the questions of a friend, this illuminating guide describes the evolutionary path of our higher spiritual aspirations–the quest for the ultimate reality, the journey toward God. It is chiefly concerned with spiritual retreat, an advanced and potentially dangerous Sufi practice that aims at the attainment of the Presence of God through absolute abandonment of the world. Realizing the imagination’s deceptive power, ‘Arabi warns that this form of retreat should not be undertaken except at the order of a sheikh or by one who has mastered the self. Each stage of the journey is accompanied by a temptation which can be overcome only by an unshakable desire for God.

‘Arabi explains each step of the ascent leading toward human perfection. In this perilous voyage of self-discovery, the reader will encounter the Realms of the mineral, vegetable, and animal worlds, eventually reaching the Gardens and the Throne of Mercy. The traveler of the Sufi mystic path is called upon to cleanse his or her heart in order to safely reach the final destination–the Lord of Power.

There slumber in every human being faculties by means of which she can acquire for herself a knowledge of higher worlds. Mystics, Gnostics, Theosophists –…

The Faerie are not just little sprites with wings. They are an entire spiritual race of beings that exists on another level of reality, the…

Examines the left-hand path and reveals the masters of the tradition • Explores the practices and beliefs of many left-hand path groups, including the Cult…

We all want to know what happens when we die. According to Cyndi Dale, we don’t have to wait to find out. With The Journey…

Other Worlds – Many shamanic cosmologies posit the existence of lands, realms, or dimensions accessible to shamans after initiation and training. These are rarely if…