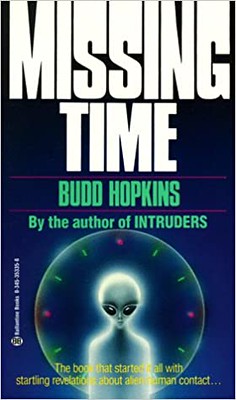 The arrival of extraterrestrial visitors is one of the most momentous events of our time. In Intruders Budd Hopkins explored the shocking truth about the contact between earthling and alien: that human beings are temporarily abducted and taken aboard UFOs. But Hopkins could not have told the stories of those victims without first having discovered the one experience common to all who report alien encounters — the phenomenon known as “missing time.”

Missing time tells how the people who have experienced abductions retained no memory of them — all traces of the trauma were effectively erased from their memory. Yet, under hypnosis, many abductees were able to recall in vivid, convincing detail, the harrowing experiments that left mysterious scars on their bodies, the eerie interiors of UFOs where they were held captive, and the astonishing faces of their alien hosts.

The stories of seven victims of these otherworldly intruders are told her — in detail at once dispassionate and dramatic, fully supported by scientific documentation. They are stories that could belong to anyone: your neighbours, your loved ones, even you.

One of the foremost researchers into the alien abduction experience, Budd Hopkins helped spread public awareness of this phenomenon through three popular books, Missing Time…

As an associate professor of history at Temple University in Philadelphia, David M. Jacobs specializes in the histories of American popular culture, twentieth-century America, and…

Whether they have remembered an abduction experience on their own or through hypnosis, people who claim to have been abducted by aliens typically exhibit one…

Sceptics say that memories of a paranormal experience, which sometimes can only be recalled with the help of hypnosis are false—that the events the subject…