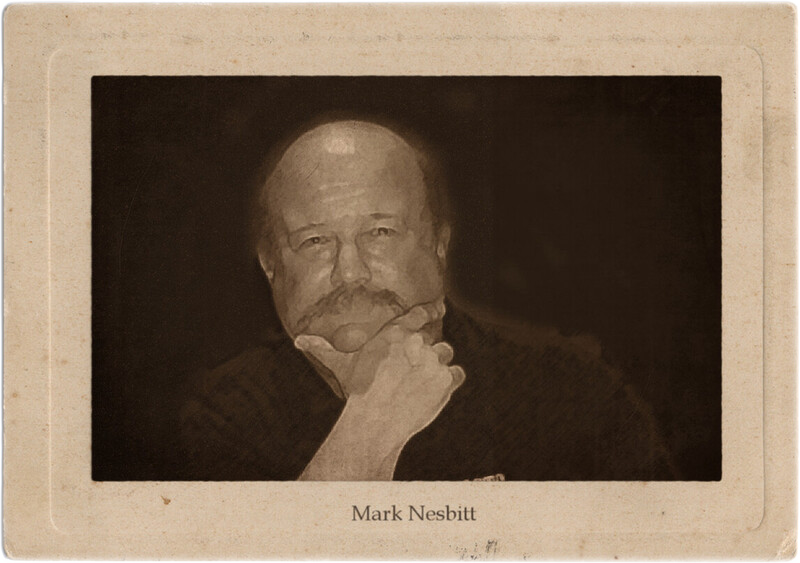 Mark Nesbitt (1949– ) is a Paranormal investigator and author and the recognized leading expert on Ghosts and Hauntings in Gettysburg Battlefield and environs.

Mark Nesbitt was born on September 2, 1949, in Lorain, Ohio. He got interested in the Civil War when he was about eight years old.

In 1971, he graduated from Baldwin-Wallace College in Berea, Ohio, with a bachelor’s degree in English literature. He went to work for the National Park Service in 1970, prior to graduation, and continued with the service after college, spending five years as a ranger and historian. Upon graduation, he moved to Gettysburg. After leaving the National Park Service, he became a licensed battlefield guide.

At Gettysburg, the stories of ghosts and hauntings piqued his interest. He once asked one of his supervisors, Ron Wilson, if Wilson knew of any ghost stories concerning the battlefield. Wilson replied, “There are enough true stories about this battlefield that will scare the pants off you. We don’t need any ghost stories.”

However, part of the story of the battle at Gettysburg involves the ghosts who linger behind, as Nesbitt was soon to find out. The battle, fought from July 1–3, 1863, was one of the most intense of the Civil War and marked the turning point. The casualties of dead, wounded, and missing ranged in estimate from 44,000 to 51,000. Haunting activity has been reported throughout the huge battlefield, which includes the town, with numerous “hot spots,” as well as historic homes and buildings, many of which were turned into temporary hospitals and morgues.

Nesbitt’s job enabled him to experience all of Gettysburg from the inside out and to live in four of the historic houses, all of which were haunted: Weikert House, Hummelbaugh House, Roundtop Schoolhouse, and the National Cemetery Lodge. He had many unexplained experiences at the houses. For example, at the National Cemetery Lodge, he heard a baby crying. He learned that the haunting has its roots in a Civil War orphanage located nearby on the same road.

In 1977, Nesbitt started his own research and writing company. He wrote books concerning Civil War history, focusing especially on Gettysburg: Drummer Boy at Gettysburg (1977); If the South Won Gettysburg (1980); 35 Days to Gettysburg (1992); Rebel Rivers (1993); Saber and Scapegoat: J.E.B. Stuart and the Gettysburg Controversy (1994); and Through Blood and Fire (1996).

In 1991, Nesbitt almost single-handedly started what became a major part of the tourist industry in Gettysburg: ghosts and hauntings. Until then, stories about the ghosts at Gettysburg and people’s encounters with them on the battlefield and in town remained largely part of oral lore—stories shared personally and occasionally in the media. Nesbitt began researching and collecting stories, which he published as Ghosts of Gettysburg in 1991. He started leading walking tours of haunted places in town in June 1994. June 6, 1994, was the first Ghosts of Gettysburg tour, and Nesbitt bought the building of the present headquarters in 1997.

The ghost enterprise did not rocket to immediate success, but Nesbitt kept at it, building it up year after year. Then the popularity of ghosts caught on, and other ghost tours were created and books written. Today, Gettysburg— still a small town of about 8,000 people—arguably has more ghost tours than most other cities anywhere. Nesbitt’s Ghosts of Gettysburg is the largest, with four different tours. Over time, the business expanded to include a bus tour and collaborations with the Gettysburg and Northern Railroad to produce the Ghost Train excursions.

In 2005, Nesbitt published The Ghost Hunter’s Field Guide: Gettysburg & Beyond. Though the field guide features Gettysburg haunts, the book also discusses the nature of ghosts and hauntings, possible explanations, and how to conduct research and use equipment.

In 2003, Nesbitt married Carol Bowman, who has a business background in computers and retail marketing. In 2004, they started their own publishing business, Second Chance Publishing, which took over the Ghosts of Gettysburg series with Volume VI.

In 2006, Nesbitt established the Ghosts of Fredericksburg Tours in Fredericksburg, Virginia, another area rich in Civil War battle and ghost lore. He published The Ghost Hunters Field Guide to Fredericksburg, Chancellorsville, the Wilderness and Spotsylvania in 2007.

Nesbitt makes numerous public and media appearances, speaking on both history and the paranormal. He was a keynote speaker on teaching history through folklore at the National Civil War Museum at the Robert Byrd Teaching America History Project. At the 2004 Eastern Regional Paranormal Conference, he received a National Paranormal Award for “best true hauntings collection” and “best ‘local haunt’ guidebook.”

Other books are Haunted Pennsylvania (2006), coauthored with paranormal investigator Patty Wilson, and Sixty Things to Do When You Turn Sixty (2006), as a contributing author.

Nesbitt says we have yet to understand exactly what causes ghosts, but clearly something continues after death. He has had unusual and unexplained experiences in Gettysburg, as well as at other haunted places. Six might be considered “ghosts,” he says: Two visual, one olfactory, and three auditory. One of the visual experiences occurred in the Ghosts of Gettysburg headquarters building on Baltimore Street. He saw a small woman dressed all in black standing in one of the rooms downstairs, which may have a connection to one of the former owners.

Investigating the paranormal is an interdisciplinary field that will take people through physics, psychology, religion, and human biological processes in an attempt to understand the nature of the mysterious remnant energy that we leave behind.

In addition, he has had countless “feelings” in certain houses and certain parts of the battlefield—an experience shared by many investigators as well as casual visitors. In his own investigations, which number more than 100, Nesbitt has acquired numerous examples of photographic anomalies and more than 300 Electronic Voice Phenomena recordings.

The print version of this first volume in the “Ghosts of Gettysburg” book series was released in October 1991, and established Gettysburg as the mecca…

Cashtown Inn is a Eighteenth-century inn located in Gettysburg, Pennsylvania, with a long history of haunting activity, dating to possibly the late 19th century. Modern…

Gettysburg battlefield is the site of the turning point of the American Civil War (1861–1865). The three-day battle at Gettysburg, Pennsylvania, was fought July 1–3,…

Gettysburg, Pennsylvania, marks the site of the bloodiest battle of the American Civil War. More than 50,000 men lost their lives in the three-day battle,…