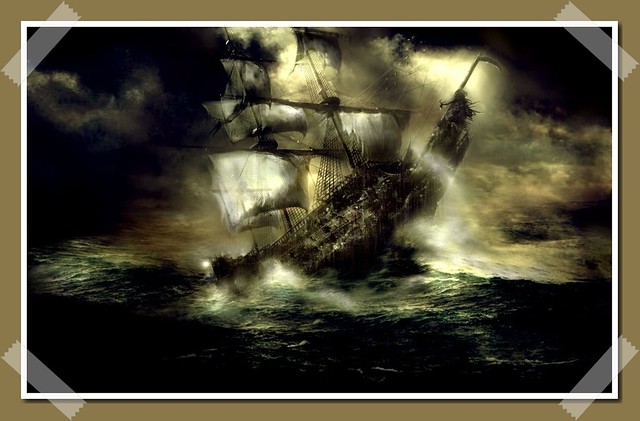 The Palatine light is a phantom ship, seen off Block Island, Rhode Island, in the North Atlantic waters. The story of the Palatine, like many folk tales, is based on fact but probably is greatly embellished with fancy. There are different versions of the tragedy.

According to one version, the Dutch ship, the Palatine, left Holland in 1752 with a load of immigrants bound for Philadelphia. Off the coast of New England, the ship suffered damage by storms. Then the crew mutinied, killed the captain, robbed the passengers, and abandoned them, taking off in the lifeboats. The ship ran aground on Block Island, off Rhode Island, a place so notorious for shipwrecks that it supported a band of land pirates called the Block Island Wreckers, who made their living salvaging wrecks.

This time, however, the Wreckers humanely saved the survivors before plundering the wreck. One survivor, a woman who had gone insane from the trouble at sea, refused to leave the ship, even though the Wreckers planned to set it afire once they had finished scavenging. She remained aboard, and as the tide carried the flaming wreck out to sea, her screams could be heard by those ashore. According to another version, the ship bore German immigrants and was deliberately run ashore by the captain and crew for the sake of plunder.

Still another version holds that the ship was lured aground one stormy night by the decoy lights of the land pirates. In both of these versions, the pirates did not save the survivors, but plundered the ship and set it afire with the living still on board. The blazing Palatine light, as the phantom is called, was seen periodically by the inhabitants of Block Island in the late 18th through 19th centuries, and came to be a harbinger of stormy weather.

Family recollections recorded by one Thomas R. Hazard in Recollections of Olden Times in 1879 tell of one unnamed resident “who was generally well and in his right mind except at the season of the year when the Palatine ship was wrecked.” At that time, the old man

became madly insane, and would rave about seeing a ship all ablaze, with men falling from her burning rigging and shrouds, and ever and anon shrink in horror from the spectres of two women, whose hands he cut off or disabled by blows from a cutlass, as they sought to cling to the gunwale of the last boat that left the burning ship and all on board to their fate that not one might remain alive to bear witness of the terrible catastrophe and crime.

During the 19th century, it was believed among Block Islanders that the Palatine light had been sent by God to punish the wicked men who murdered her passengers and crew, and that when the last of the pirates was dead the ship would be seen no more. Reports of the Palatine light continue into contemporary times.

Valencia Macabre phantom ship that haunts the sea off the west coast of Vancouver Island, British Columbia. The Valencia was a steamship owned by the…

The Mary Celeste incident is one of the most famous cases of mysterious disappearance. On December 4, 1872, a ship called the Dei Gratia came…

Ship of the Dead A universal motif in mythology that is a means by which the SOULS of the dead leave earth for the afterworld.…