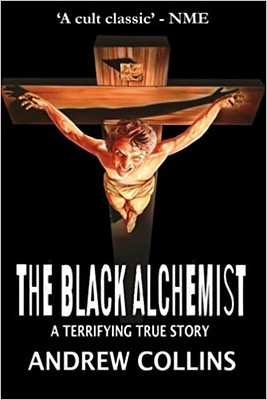 The Black Alchemist is a real account of terrifying true events. The nightmare begins when Collins and his friend Bernard G. visit a secluded churchyard on the Sussex Downs of southern England as part of a psychic quest. They are looking for an ancient Egyptian treasure, a golden staff known as the Stave of Nizar, brought to England at the time of the Crusades. Yet instead of finding a long lost Egyptian relic they uncover a stone spearhead, inscribed with magical symbols. Through further investigation they discover it has been concealed as part of a dark occult ritual by a character they dub the Black Alchemist. Collins and Bernard are then thrust into a series of horrifying confrontations as this sinister figure attempts to put a stop to their unwanted interference.

Then, in the aftermath of Britain’s first hurricane in nearly 300 years, the Black Alchemist initiates the next phase of his great work—the creation of an antichrist, a second Adam, taking the form of an unholy child of unspeakable power. Even though Bernard now wants out of this dangerous affair, Collins convinces him it is something they cannot ignore, setting up a final psychic confrontation on the Sussex Downs.

During the course of his investigations the author uncovers the true extent of the Black Alchemist’s obsession with Graeco-Egyptian magic and alchemy, as well as his use of the angelic invocations of Elizabethan magus Dr John Dee. Plus he learns the final fate of the historical object known as the Stave of Nizar.