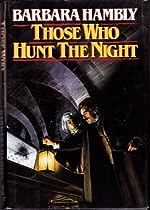 Those Who Hunt the Night, by Barbara Hambly (Ballantine, 1988):

Another “good vampire / bad vampire” novel with a strong period atmosphere. In Victorian England a husband-wife investigative team, Prof. James Asher and his wife Lydia, are commissioned by Simon Ysidro to find out who has been murdering London's vampires.

To call Simon “good” is less than accurate; Hambly's Undead seem to be modeled on Rice's in their amorality, violence, and detachment from humanity. Simon does, however, refrain from the worst excesses and contract a good-faith alliance with James Asher, and the two of them attain, if not friendship, mutual respect.

Hambly emphasizes the psychic aspect of vampire predation; Simon and his kind (like Strieber's Miriam) perceive human emotions, and they crave the “high” of fear and torment as much as the blood itself. Their vulnerabilities, aside from a stake through the heart, include the traditional sunlight (a persistent assumption in most contemporary vampire fiction, despite its absence from the nineteenth-century prototypes) and silver.

Besides Simon, James, and Lydia, striking characters include a guilt-driven vampire monk and Blaydon, a “mad scientist” character whose son has become a mutant vampire. The novel's title has an ironic triple application — to the vampires, to the fanatical Blaydon, and to James in his role as detective.

Back to Vampire Books