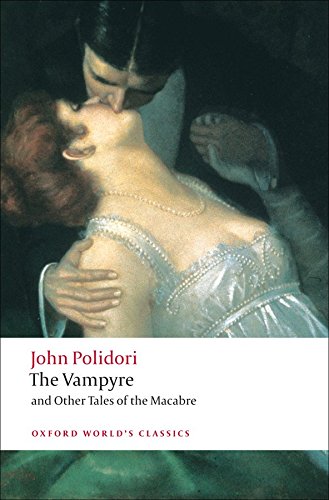 The Vampyre is the first Vampire story published in English, a novella written by John Polidori, physician to Lord Byron. The Vampyre appeared in England’s New Monthly Magazine in April 1819. Polidori borrowed heavily from an oral story he heard Lord Byron tell one night during a trip in Europe. The story originally was published with the implication that Byron wrote it, and it and was hailed by critics and quickly translated into French and German. Byron was furious.

Polidori revealed himself as the true author. The Vampyre draws upon a folklore belief that a vampire corpse can be repeatedly revived under the rays of the moon. Polidori also made use of the Greek lore that one becomes a vampire as punishment for a heinous crime committed in life and is doomed to prey upon those whom he loved the most while upon the earth. The vampire antihero is the mysterious but suave and seductive Lord Ruthven, whom Polidori modeled upon Lord Byron.

Ruthven (pronounced “rivven”) was taken from a satire of Byron, Glenarvon, written by Byron’s lover, Lady Caroline Lamb. There may have been a real-life association as well: Lord Grey de Ruthyn had tried to seduce Byron when he was young. The character of Lord Ruthven is “a man entirely absorbed in himself.” It is likely that Polidori based Ruthven’s friend, Aubrey, upon himself.

The character of Aubrey is naive and trusting, a man who cultivates “more his imagination than his judgment.” Lord Ruthven is introduced to society in London and attracts the interest of a young rich man, Aubrey, an orphan, to whom Ruthven is attracted. Together they travel about the Continent. However, they part company in Rome when Aubrey learns of his companion’s immoral nature and is repulsed by his shallowness.

In Greece, Aubrey falls in love with a peasant girl named Ianthe, who tells him terrifying legends about the “vampyre . . . forced every year, by feeding upon the life of a lovely female victim to prolong his existence for the ensuing months.” Aubrey recognizes Lord Ruthven as having the same characteristics. One night Aubrey defies the warning of locals and travels through a dark wood during a violent storm.

He hears fiendish laughter and a woman’s screams, and investigates. Entering a hovel, he is attacked by something that seems superhuman in force and is rendered unconscious. When he awakens, he is horrified to find Ianthe has been murdered— her badly mutilated body is covered with blood and there are teeth marks on her throat. A strange-looking, bloody, dagger is nearby. The news of Ianthe’s gruesome murder causes her parents to die of grief and shock.

Aubrey remains ill and bedridden. Ruthven arrives on the scene, coming from Athens, and he nurses Aubrey back to health. Ruthven and Aubrey resume their travels together in Greece. Out in the remote countryside, they are beset by bandits, and Lord Ruthven is mortally wounded by gunshot. For two days he lingers. He makes Aubrey swear not to reveal his death back in England for a year and a day. Ruthven further orders the robbers to expose his corpse to the “first cold ray of the moon” on a mountaintop. They do so.

The following night, Aubrey discovers that the corpse has mysteriously vanished, and he assumes the robbers stole it for the clothing. He finds the bloodstained sheath of the dagger found near Ianthe’s body. Aubrey returns to England, where he is astonished to see Lord Ruthven at a fashionable party. Ruthven reminds him of his oath to keep quiet about his death in Greece. Distraught, Aubrey’s mental health begins to suffer.

He sees vampires everywhere and then is confined to bed with brain fever. Meanwhile, Aubrey’s sister announces her engagement to the earl of Marsden. She shows a miniature portrait of the earl to Aubrey. He is astonished to see that it is Lord Ruthven. He flies into a rage, is judged insane, and is confined.

He confronts Ruthven, but again is reminded of his oath. Aubrey bursts a blood vessel in apoplexy and lapses into incoherence. On midnight of the day before the wedding—the time when Aubrey’s oath of silence is over—Aubrey is dying. He informs his guardians of his secret and urges them to save his sister.

The story ends: “The guardians hastened to protect Miss Aubrey; but when they arrived, it was too late. Lord Ruthven had disappeared, and Aubrey’s sister had glutted the thirst of a VAMPYRE!” The Vampyre caused a sensation in Europe and reined as the dominant influence on literature and drama until the publication of Dracula by Bram Stoker in 1897.

In its wake, novels, stories, and plays about Lord Ruthven and other vampires then flooded the marketplace. Charles Nodier’s novel, Lord Ruthven ou les vampires (1820), was revised as a play entitled The Vampire; or, The Bride of the Isles. It was translated into several languages and toured Europe and North America for years to come.

The Irish playwright Dion Boucicault wrote his play The Vampire based on the story. The vampire, Alan Raby, “dies” during the reign of Charles II. He is finally brought to his demise when he is shot with a charmed bullet. Adaptations of The Vampyre appeared on a regular basis until the middle of the century.

The last noteworthy performance, Alexandre Dumas père’s play Le Vampire, opened at the Ambrigue-Comique in 1851. It is difficult to gauge what the impact of The Vampyre might have been if it had first been published under Polidori’s name. Certainly the name of Byron guaranteed it wide attention.

The Vampyre established important elements of vampire fiction that became more embedded in subsequent creations of other authors, such as Stoker and J. Sheridan Le Fanu.

Haining, Peter, and Peter Tremayne. The Undead: The Legend of Bram Stoker and Dracula. London: Constable, 1997.
Senf, Carol A. The Vampire in 19th Century English Literature. Bowling Green, Ohio: Bowling Green State University Popular Press, 1988.
Stuart, Roxana. Stage Blood: Vampires of the 19th-Century Stage. Bowling Green, Ohio: Bowling Green State University Popular Press, 1994.
Twitchell, James B. The Living Dead: A Study of the Vampire in Romantic Literature. Durham, N.C.: Duke University Press, 1981.
[author image=”https://occult-world.com/wp-content/uploads/2014/09/roseMary-guiley.jpg” ]Rosemary Guiley works full-time in the paranormal and metaphysical fields. She has written more than 50 books, including single-volume encyclopedias, on a variety of topics, A-Z, angels to zombies and everything in between. Source Amazon.[/author]
Taken from : The Encyclopedia of Vampires, Werewolves, and Other Monsters

A thrilling treasury of vampire lore! Since the seventeenth century, people have been frightened, mesmerized, and fascinated by the terrifying tales of vampires. In this…

Since the dawn of civilization, the vampire has danced through the dreams and nightmares of every culture, expressed in folklore, literature, and art. Today, this…

The modern idea of the vampire is open to many different possibilities. What defines a vampire? And where did these traits come from? Certain ideas…

Newstead Abbey is a former priory and home of poet Lord Byron, inhabited by several ghosts. Newstead Abbey, located in Nottinghamshire, England, was built in…