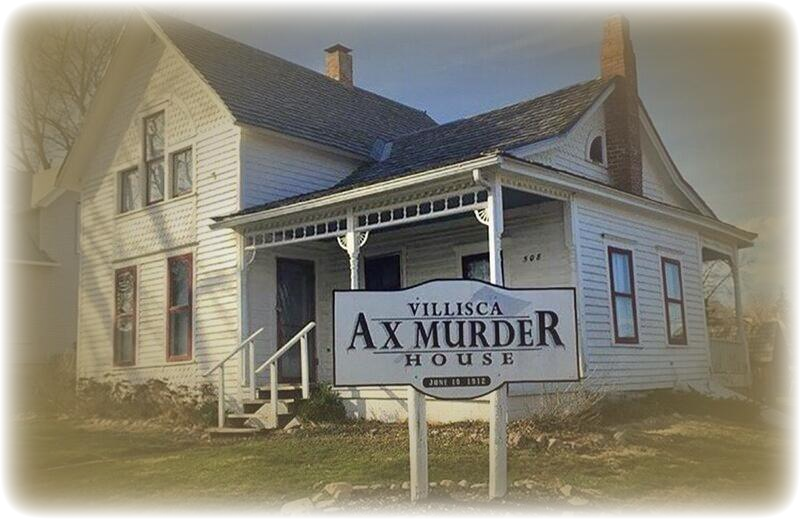 On June 10, 1912, sometime between the hours of midnight and 5 a.m., a string of gruesome murders took place at the two-story, humble white house of J.B. Moore in the small town of Villisca, Iowa. This would soon come to be known as the worst mass homicide in Iowa history.

The eight victims, all bludgeoned to death, were Josiah B. Moore (age 43), his wife, Sara Moore (age 39), their children Herman (age 11), Katherine (age 10), Boyd (age 7), and Paul (age 5), and two guests in the home, Lena Stillinger (age 11) and Ina Stillinger (age 8). The murder weapon was located by police; it was a large axe owned by Josiah Moore. The axe was found in a small bedroom downstairs, propped up against a wall, next to the dead bodies of Lena and Ina Stillinger.

There were many suspects in this gruesome murder, but no one was ever charged, and the case remains unsolved to this very day. The J.B. Moore residence, currently uninhabited, is known as a hotbed of paranormal activity. The current owner has restored the home to the way it looked in 1912 and, for a small fee, rents the house out to anyone who dares to spend the night.

The Villisca Axe Murder House has been investigated by many ghost hunters and paranormal investigative teams from all around the Midwest. Many have spent the night in this house and reported similar experiences. Some of these experiences include the feeling of a heaviness reported around the main stairwell of the house and a strange change in appearance of the upstairs bedrooms at night. Various video and still shots have been taken with orbs and light trails appearing in them, and numerous EVP have also been captured in the house.

The real thrill ride of a night spent at the house begins around 2 a.m. It is at this time of the night when a train passes through the town of Villisca, and the whistle of the train is thought to trigger the residual events of the murder that took place back in 1912. It is widely believed that the killer(s) used the masking sound of the locomotive to sneak throughout the house and murder all its inhabitants, one by one.

Many investigators have noticed a light fog filling up the master bedroom at the point when the train whistle is first heard. This fog moves from room to room, just as the killer(s) might have. Once the fog dissipates, it is followed by the sound of dripping—the sound those eerily inclined have assumed to be blood.

Ham House Elegant house in Dubuque, Iowa, now a museum, reported to be haunted and to have paranormal and Poltergeist phenomena. The house has an…

How ironic! Used as a haunted fun house around Halloween to raise funds for the Spencer Mountain Volunteer Fire Department, this house, situated on a…

This Victorian home stands in the small town of Genoa, Nevada, and was the first established community in the Silver State. The Dake House now…

Madison, New Jersey, was the town for millionaires such as the Vanderbilts to build their estates in and maintain commutable proximity to New York City.…