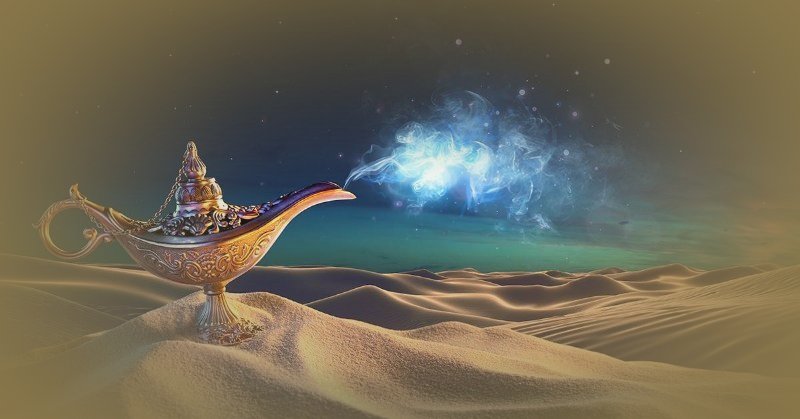 Aladdin (Alaeddin) Hero in the tale “Aladdin and the Enchanted Lamp” from The Thousand and One Nights. The tale is not included in any manuscript copy of the work. It first appeared in the French translation of the Nights (1704– 1715) by Galland, who heard the tale from a Christian Syrian, Youhenna Diab. Aladdin is a good-for-nothing son of a poor tailor in China.

After his father’s death he takes to the streets and turns up at his mother’s house only for meals. One day a man pretending to be his uncle gains Aladdin’s confidence and takes him to a high and barren mountain. The man then builds a fire and pours on it some perfumes, muttering incantations at the same time. Suddenly the earth quakes and opens, revealing an alabaster slab. Prodded by the sorcerer disguised as his uncle, Aladdin removes the slab and descends into a vault below.

It is filled with silver and gold. “Above the dais,” the sorcerer tells Aladdin, “thou wilt find a lamp hung up; take it and pour out the oil that is therein and put it in thy sleeve; and fear not for thy clothes therefrom, for it is not oil. And as thou returnest, thou mayest pluck from the trees what thou wilt, for that is thine as long as the lamp is in thy hand.” The sorcerer then gives Aladdin a ring that will protect him from all evil. Then, as Aladdin is trying to climb out of the vault, the sorcerer closes the marble slab over him.

Aladdin calls upon Allah for help and at the same time accidentally rubs the lamp, whereupon one of the marids, the most powerful of the Djinn (genies), appears. “Here am I, thy slave,” announces the marid. “Ask what thou wilt, for I am his slave who hath the ring in hand, the ring of my lord.” Aladdin asks to be freed and the marid obeys his wish. By means of the magic lamp Aladdin obtains wealth, has a palace built, and marries Bardroulboudour. When the sorcerer finds that Aladdin has escaped, he sets out to recover the magic lamp. After buying a number of lamps from a coppersmith, the sorcerer goes about the streets, crying: “Who will barter an old lamp for a new?”

All the town thinks he is crazy, but Bardroulboudour exchanges the magic lamp for a new copper one. Immediately the sorcerer rubs the lamp, conjures the marid, and orders Aladdin’s palace and all his goods transported to Africa, the sorcerer’s home. Aladdin is out hunting while this happens and, rubbing his ring to return to the palace, he is transported to Africa. Later, with the aid of his wife, Aladdin drugs the sorcerer and cuts off his head. After some more adventures (for the sorcerer has an evil brother) Aladdin and his wife live happily until death, the destroyer of delights, separates them.

Aladdin’s story has been set to music by many composers (although none of the operas is still performed), and it has been a favorite movie subject. The palace built by the marid of the lamp had a room with 24 windows, all but one set with precious stones. The last was left for the sultan to finish, but his monetary resources were unequal to the task; thus the phrase, “to finish Aladdin’s window,” which means to attempt to complete something begun by a master hand or genius. Longfellow’s poem on Hawthorne’s death concludes:

Ah! who shall lift that wand of magic power And the lost clue regain? The unfinished window in Aladdin’s tower Unfinished must remain!