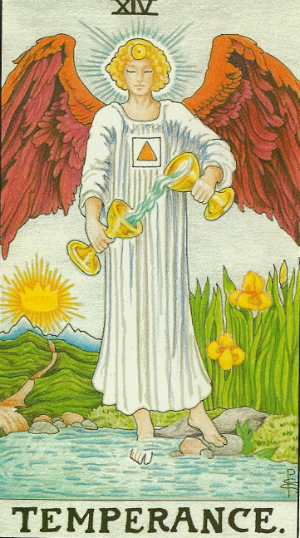 Temperance (XIV) is the fourteenth trump or Major Arcana card in most traditional Tarot decks.

Temperance is almost invariably depicted as a person pouring liquid from one receptacle into another. Historically, this was a standard symbol of the virtue temperance, one of the cardinal virtues, representing the dilution of wine with water. In many decks, the person is a winged person/angel, usually female or androgynous, and stands with one foot on water and one foot on land, perfectly balancing and combining the two qualities of male and female, the conscious and the subconscious mind. In the Rider-Waite-Smith deck, the Sun in the background conceals a crown. That crown is the ego, who has died and is at the cusp of the adventures of the night. The flowers are Irises, of course, sacred to the Goddess of the rainbow.

Temperance (Italian: La Temperanza) appears in the oldest Italian decks where it is numbered VI or VII. In the Tarot de Marseilles and in most contemporary decks the card is numbered XIV. In the Thoth Tarot and decks influenced by it, this card is called Art rather than Temperance. A woman mixing water into wine was a standard allegory of Temperance in European iconography. This statue is part of Peter of Verona's tomb.

Temperance, like Justice, indicates the need for balance and tranquility to achieve and experience fulfillment in our lives. The temperate individual mixes the opposites and finds a balance in life by avoiding extremes. Some Jungians say that Temperance represents the unconscious, which can guide us, they contend, to a deeper understanding of ourselves. The one foot on the land, the other in the water, represents the unification of the external and internal, conscious and unconscious, realms.

In addition to its literal meaning of temperance or moderation, the Temperance card is often interpreted as symbolizing the blending or synthesis of opposites. An influential tradition originating with the Hermetic Order of the Golden Dawn associates Temperance with the astrological sign Sagittarius. In most modern tarot decks, Temperance stands between Death and The Devil. He or she (traditions vary) guides the souls of the dead to judgment.Others say that the vessels in the Angel’s hands represent the Golden Crucible of Taoism; the vessel that contains eternal life. Others say it is representative of the head feeding the stomach; unification of the physical and spiritual needs.

The appearance of Temperance in a reading may suggest to the Querent that moderation is required in some aspect of life. In other interpretations the card may serve as a reminder that a compromise between two seemingly incompatible options is often the best option. Conflict can only be resolved through compromise and cooperation, and two people who both acknowledge this cannot be in conflict for long, because they always balance things out before they become problematic. Likewise, they enjoy the good times but know that they cannot last forever, and are not disappointed on darker days.

If a relationship seems out of balance in any way, Temperance must be taken as a sign to start fixing things before it gets too far out of balance and it is irrevocably destroyed. Temperance is the card of good health in all areas – physical, mental and emotional. When illness or dis-ease is a concern, Temperance holds out the promise of vitality and well-being.

Temperance reversed suggests that you lack a long-term vision and/or purpose and, as a result, you are feeling out of balance. This is a time when you need to reflect on what changes are necessary in your life to create greater purpose and fulfilment.
Opposing cards

An angel in a white robe, touching earth and heaven, appeared. His wings were flame and a radiance of gold was about his head. On his breast he wore the sacred sign of the book of the Tarot–a triangle within a square, a point within the triangle; on his forehead the symbol of life and eternity, the circle.
In one hand was a cup of silver, in the other a cup of gold and there flowed between these cups a constant, glistening stream of every colour of the rainbow. But I could not tell from which cup nor into which cup the stream flowed.
In great awe I understood that I was near the ultimate mysteries from which there is no return. I looked upon the angel, upon his symbols, his cups, the rainbow stream between the cups,–and my human heart trembled with fear and my human mind shrank with anguish and lack of understanding.
“Yes”, said the voice, “this is a mystery that is revealed at Initiation. 'Initiation' is simply the revealing of this mystery in the soul. The Hermit receives
p. 56
the lantern, the cloak and the staff so that he can bear the light of this mystery.
“But you probably came here unprepared. Look then and listen and try to understand, for now understanding is your only salvation. He who approaches the mystery without complete comprehension will be lost.
“The name of the angel is Time. The circle on his forehead is the symbol of eternity and life. Each life is a circle which returns to the same point where it began. Death is the return to birth. And from one point to another on the circumference of a circle the distance is always the same, and the further it is from one point, the nearer it will be to the other.
“Eternity is a serpent, pursuing its tail, never catching it.
“One of the cups the angel holds is the past, the other is the future. The rainbow stream between the cups is the present. You see that it flows both ways.
“This is Time in its most incomprehensible aspect.
“Men think that all flows constantly in one direction. They do not see that everything perpetually meets and that Time is a multitude of turning circles. Understand this mystery and learn to discern the contrary currents in the rainbow stream of the present.
“The symbol of the sacred book of the Tarot on the angel's breast is the symbol of the correlation of God, Man and the Universe.
p. 57
“The triangle is God, the world of spirit, the world of ideas. The point within the triangle is the soul of man. The square is the visible world.
“The consciousness of man is the spark of divinity, a point within the triangle of spirit. Therefore the whole square of the visible universe is equal to the point within the triangle.
“The world of spirit is the triangle of the twenty-one signs of the Tarot. The square represents fire, air, water and earth, and thus symbolises the world.
“All this, in the form of the four symbols, is in the bag of the Fool, who himself is a point in a triangle. Therefore a point without dimension contains an infinite square”. – The Symbolism of the Tarot by P D. Ouspensky (1913)