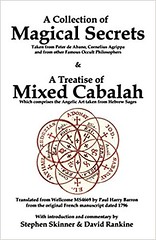 A Collection of Magical Secrets Taken from Peter de Abano, Cornelius Agrippa and from other Famous Occult Philosophers and A Treatise Of Mixed Cabalah Which comprises the Angelic Art Taken From Hebrew Sages Translated from Wellcome MS4669 by Paul Harry Barron from the original French manuscript dated 1796 With Introduction by Stephen Skinner & David Rankine

This book bridges the worlds of learned magic and village cunning, providing rare and previously unavailable material from the late eighteenth century. It comprises two parts, A Collection of Magickal Secrets and A Treatise of Mixed Cabalah, both of which contain unique and exciting magical material that were previously bound together in a French manuscript with The Clavicule of Solomon and The Universal Treatise of the Keys of Solomon. These are reproduced along with The Keys of Rabbi Solomon, in The Veritable Key of Solomon, the most significant grimoire publication of modern times, by Stephen Skinner & David Rankine.

A Collection of Magical Secrets contains a collection of charms, ranging from the very simple to the complex. There are charms for healing, winning in love and gambling, gaining familiar spirits, regaining stolen or lost property, instructions for the creation of magic rings for controlling spirits, and a rare angelic conjuration of a Prince of the Thumb. A wide range of sympathetic magick techniques such as dreaming, poppets, using bread, herbs and sieves, are utilised to ensure the success of the charms.

A Treatise of Mixed Cabalah contains four parts, three of which fit together to develop a greater knowledge of the practical Qabalah. This includes a ritual sequence of prayers and actions for increasing knowledge, practical instructions for the construction, consecration and use of wax pentacles for absent healing, a technique for angelic dream incubation and a system of divination with 112 possible answers.

This classic text of the Nine Great Keys details the invocation of the Archangels, the full hierarchy of spiritual beings (including Olympic Spirits and Elementals)…

Also called The Secrets of Secrets, this black magic grimoire purportedly was written in the 1600s by a magician named Toscraec, who claimed that it…

This manuscript was owned by Dr. Thomas Rudd, a practicing scholar-magician of the early seventeenth century who knew Dr. John Dee. There are many editions…

There have been many grimoires attributed to St. Cyprian of Antioch due to his reputation as a consummate magician before his conversion to Christianity, but…

THE BOOK OF TREASURE SPIRITS Conjurations of Goetic spirits, old gods, demons and fairies are all part of a rich heritage of the magical search…