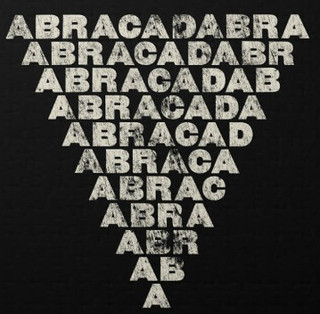 Abracadabra is a magical spell consisting of a single word, which was popular in medieval times to get rid of illness, misfortune or Demons. The word is inscribed on an amulet (see Amulets) or written out on paper in a magical inverted triangle, in which one letter of the word is dropped in each succeeding line, until nothing is left. The evil is supposed to fade away just as the word does. The diminishing word technique is used in many other Spells for the same purposes.

In medieval times, abracadabra was believed to ward off the plague. The triangle was written on a piece of paper, which was tied around the neck with flax and worn for nine days, then tossed backwards over the shoulder into a stream of water running toward the east.

The word’s origin is unknown. It is said by some to have been invented around 208 by Quintus Serenus Sammonicus, physician to the Roman emperor Severus, as a cure for fever. Some hold that Sammonicus merely borrowed a formula that was much older.

According to others, the word comes from the old Aramaic phrase, abhadda kedhabhra, “disappear like this word,” or the Hebrew phrase abreq ad habra, “hurl your thunderbolt even unto death.” It is also said to be derived from the name Abraxas, the Gnostic god who appears on charms against the Evil Eye dating from the second century. Another possibility is that it is the name of some long-forgotten Demon.

Increase Mather dismissed it as a “hobgoblin word” that had no power at all. Aleister Crowley, on the other hand, said it is a magical word of great power and that its true form is Abrahadabra.

How To Use The Powers of Darkness: A Book Of Shadows – Gary Brodsky

How to Make and Use a Magic Mirror – Donald Tyson

Raising Hell: A Concise History of the Black Arts and Those Who Dared to Practice Them – Robert Masello

Stacker Lee (also Stagolee, Stackerlee, Stackalee) is in American folklore, a black man who entered into a Devil ’s pACt and brought about his own…

charms Magical words, phrases, chants (see chanting) and incantations used in the casting of spells. Charms have been common since ancient times. Some charms are…

horseshoe Amulet against witches, Fairies, the Devil, bewitchment, evil spirits and the eVIl eye. In earlier times, horseshoes were made of Iron, which in folklore…

ValentineGreatrakes (1629–1683) was an Irish healer called “Mr. Greatrix,” “Mr. Greatraks,” and the “stroker,” who cured maladies by a laying on of the hands. Valentine…

A comprehensive handbook of more than 1,000 magical words, phrases, symbols, and secret alphabets • Explains the origins, derivatives, and practical usage of each word,…