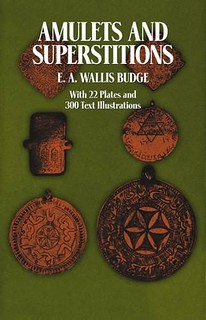 A vulture tied to the neck of a mummy gave it the strength of the goddess Isis … Women in Central Africa ate a frog to have large families … A serpent head amulet could ward off venomous snakes … Ethiopians wore stones to keep the Evil Eye away … Abracdabra healed a man suffering from fever … Hebrew women wore stones to prevent miscarriage … Emeralds cured diseases of the eye … Garnets protected man from terrifying dreams and skin diseases … Melitites warded off infantile diseases … Moonstones protected men against epilepsy … Rubies protected men from witchcraft, plague, and famine …

By far the most thorough, most fascinating coverage of amulets and superstitions is the present book by Dr. E. Wallis Budge.

In it he presents a wealth of information on the origins of amulets and talismans of many cultures and traditions: Arab, Persian, Babylonian, Assyrian, Egyptian, Ethiopian, Gnostic, Hebrew, Mandaean, Phoenician, Samaritan, and Syriac. He discusses ring amulets, terra cotta devil-traps; stones and their prophylactic and therapeutic qualities; the importance of color, shape, and form in amulets; the Swastika; the cross; the crucifix; the evil eye; the Kabbalah; astrology; the seven astrological planets; theories about numbers (good and bad luck numbers, sequences, magic squares); divination by water, earth, or sand; lucky and unlucky days; the hand of Fatimah; contracts with the devil and envoûtement. The text is profusely illustrated, with many reproductions of amulets, stones, prayers, crosses, numbers, seals, gods, rings, signs of the zodiac, and much more.

Dr. Budge of the British Museum was one of the foremost Egyptologists of the twentieth century. Dover also published many of his other works: The Dwellers on the Nile, Egyptian Magic, The Egyptian Book of the Dead, and The Gods of the Egyptians.

Rings are amulets of power, strength, divinity, sovereignty and protection. In legend, they are also Talismans of Magic, enabling their wearers to perform supernatural feats…

Former Keeper of Egyptian and Assyrian Antiquities in the British Museum, E. A. Wallis Budge (1857-1934) was one of the great Egyptologists of the century…

stones Stones are credited with many Magic, Healing and lucky properties. Semi-precious stones are used in Amulets to ward off the Evil Eye, illness and…