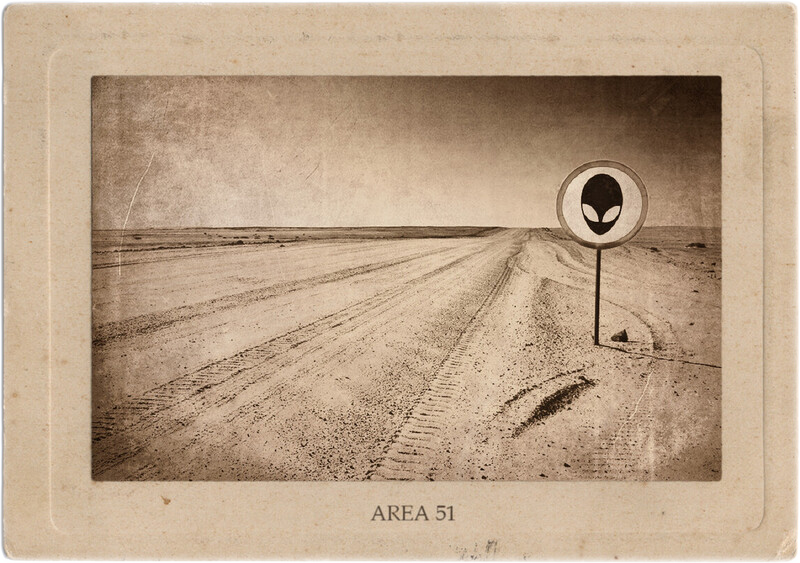 AREA 51 AND REVERSE ENGINEERING :
The debris from the UFO crash site at Roswell was taken to a secret base and used in reverse engineering and the building of highly advanced technological aircraft. In 1989 a physicist named Bob Lazar claimed that he worked at a secret base outside of Las Vegas, Nevada, where he had witnessed the reverse engineering of alien spacecraft and the testing of extremely advanced aircraft. The government officially denied the existence of the secret base, known as Area 51, but UFO investigators had long suspected that the installation, near Groom Dry Lake, was the site where a UFO that allegedly crashed near Roswell, New Mexico, in July 1947 was reverse-engineered to create such aircraft as the stealth bomber. For many years UFO buffs hid in the rugged terrain near the base and watched the night sky for the mysterious lights that they knew were engineered from an alien spacecraft.

The Groom Lake base, officially designated the “Nellis Air Force Bombing and Gunnery Range” and located on the federally protected territory in Nye, Lincoln, and Clark counties, covers an area equal to Rhode Island and Connecticut. It is in grid number 51 of the Nevada Test Site, thus, Area 51.

The base has not really been secret since the March 1993 issue of Popular Science brought the reconnaissance aircraft Aurora out of the black and revealed that the Mach-6 spy plane was developed at the closely guarded air force facility at Groom Lake. Built in 1954 as a place to test the secret U-2 spy plane that flew reconnaissance missions over the Soviet Union,the base was later redesigned to accommodate the A-12 and SR-71 manned spy aircraft and the D-21 spy drone.

In his controversial book The Day after Roswell , Col. Philip J. Corso (U.S. Army, retired) claims that he was given “personal stewardship” of various extraterrestrial artifacts recovered from the crashed Roswell spacecraft of 1947. Corso states that he distributed the objects of alien technology to select government contractors and that despite official denials, the U.S. government has employed large numbers of scientists in secretly and ambitiously achieving reverse engineering from advanced alien technology. Among the results are fiber optics, light amplification devices, Kevlar (lightweight, heavily resistant material used in, among other things, body armor), and a large number of advances in laser weaponry.

Corso was on Gen. Douglas MacArthur’s intelligence staff following the Korean War, and he was later assigned to President Dwight Eisenhower’s Security Council, then to the Army Research and Development Department’s Foreign Technology Desk at the Pentagon. According to Corso, when he moved into the Foreign Technology Division, he was given a file cabinet of artifacts from the Roswell crash and instructed to begin working on a plan of action and recommendations for their use. His superiors were enthusiastic about the artifacts’ possible utility in building spaceships that would be impervious to radiation, cosmic activity, or gunfire.

One of Corso’s first file-cabinet discoveries was a paper-thin piece of metal about the size of a postcard. Somehow the metal’s atoms were aligned in such a way that government scientists all failed to back-engineer it. Next, according to Corso, the scientists moved on to an integrated circuit, the size of a microchip, that gave rise to the transistor.

In a government program called “Applied Engineering,” Corso and his staff would find people in industry who were working in a particular area of scientific research and would then supplement these research-and-development efforts by introducing some of the alien technology. In some instances, the government agency would even fund the work.

Although Corso’s claims remain controversial, they continue to keep alive the accusations that the government has hidden the truth about the alleged alien crash at Roswell from the public.

Area 51 is a supersecret U.S. Air Force base at Groom Lake, Nevada, buried at the heart of the Nevada Test Site (60-odd miles northwest of Las Vegas). It figures prominently in most conspiracy theories involving unidentiﬁed ﬂying objects (UFOS) and government suppression of alien technology that was allegedly collected since the Roswell UFO crash of 1947. Unauthorized personnel are strictly banned from the region and are subject to arrest for trespassing.

Popular rumors (and a dramatic episode of The X-Files TV series) suggest that intruders on the site are brutally “debriefed” and may be subject to memory-erasure treatments prior to their release (if, in fact, they do not simply “disappear”). U.S. Air Force spokespersons dismiss such stories as fantasy, noting that Area 51 was the scene of prolonged testing involving “stealth” aircraft, a circumstance that may have contributed to local UFO sightings. President George W. Bush confirmed the covert base’s sinister reputation for many observers in September 2002 when he exempted Area 51 from federal environmental legislation that required disclosure of classified information concerning local operations.

Also known as the Groom Lake Base and located approximately 90 miles (145km) north of Las Vegas, Nevada, Area 51 is a top-secret military base where the U.S. government is said by UFO enthusiasts to be testing alien spacecraft, either recovered from crash sites or acquired from extraterrestrials as part of a trade of technology or information. Its name comes from the fact that the base lies in grid number 51 on maps of the larger government-controlled region called the Nevada Test Site.

Claims about its connection to UFOs aside, Area 51 has long been shrouded in mystery. The U.S. government established the military base in 1954 specifically to test a new spy plane, the U-2, which subsequently flew missions over nations such as the Soviet Union and Cuba. Later, other types of military aircraft and weapons were tested at the facility as well, and in the early 1980s the base’s runway was extended, its security measures tightened, and nearby overlooks that afforded a view of the base closed to the public. About this time, people in the vicinity of the base began seeing mysterious lights in the sky, and rumours about UFO test flights arose.

In 1989 a man claiming to be a physicist, Bob Lazar, came forward to insist that these rumours were true. He said that he had worked at a base near Area 51, though this could not be verified, and knew that the government had been testing spacecraft obtained through trade with extraterrestrials. Today many people continue to believe that there are alien spacecraft at Area 51, stored in the large hanger that is one of four main features at the base, the other three being a runway, a guard shack, and a collection of large radar antennas. Though military authorities refuse to give out information about these structures, their size can be estimated from aerial photographs taken from a private plane that managed to fly over the base. From these photographs, the hanger appears to be approximately 300 feet by 300 feet (91.4m by 91.4m), with a roof about 100 feet (30.5m) high. Though this is large enough to contain several commercial airliners, some people have suggested that it is only a small part of a much larger structure; these people contend that the hanger really covers an enormous elevator, used to bring spacecraft up from an enormous underground facility.

The runway at Area 51 is also large, estimated to be as long as 24 miles (38.4km). The guard shack, however, is small and plain, leading some people to believe that there must be a hidden security installation. As for the radio antennae, there are two large ones, several small ones, and several sensors, the latter of which are located only on the north side of the military base. The largest antenna is also on the north side, and it is rumoured to be the biggest and most powerful antenna ever made. Moreover, this antenna almost always points directly up at the sky, leading some UFO enthusiasts to conclude that its purpose is to receive alien communications. Sceptics, however, note that all military bases have antennas for use in various types of telecommunications with humans.