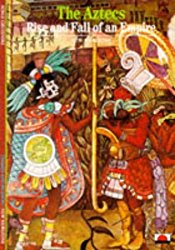 Explores the complex aspects of the ancient Aztec civilization, its artistic and cultural achievements, its bloody religion, and its history–from earliest times to its collapse with the arrival of the Spanish in the New World.

The gruesome Aztec practice of mass human sacrifice horrified Cortés when he entered Tenochticlán in 1519. Yet these bloodthirsty warriors also created a refined society, monumental architecture, powerful sculpture, magnificently illustrated codices, fine goldwork and brilliant feathered costumes. How did these contradictory aspects co-exist in one people? From their early beginnings as nomads through their time as powerful empire builders to the period of Spanish rule, The Aztecs examines the complete history of this amazing culture. The richly illustrated text is supplemented by contemporary documents including evidence on Aztec myths, social organization, trade, the arts, human sacrifice, the conquest, the continuation of Aztec religion after Christianity and the fate of the Indian population today.

Serge Gruzinski is Director of Research at the Centre National de la Recherche Scientifique in Paris and author of several books, among them The Conquest of Mexico and Man-Gods in the Mexican Highlands. Heather MacLean is a translator who lives in Forest Grove, Oregon.

Presents a summary of the rise and fall of the Aztec Empire, placing it within the context of its time period and geographical location. This…

Based on the most recent archaeological discoveries, this volume offers a balanced interpretation of the complex relationships between Aztec cultural practices, social order, and religious…

In November 1519, Hernando Cortés walked along a causeway leading to the capital of the Aztec kingdom and came face to face with Moctezuma. That…

In Aztec myths Quetzalcoatl and Tezcatlipoca stretched Hungry Woman to make the Earth. In an effort to smooth over her injured feelings because she was…

Around AD 1450 a new Mexican nation emerged called the Aztec Empire of the Triple Alliance. They succeeded in making themselves the most powerful and…