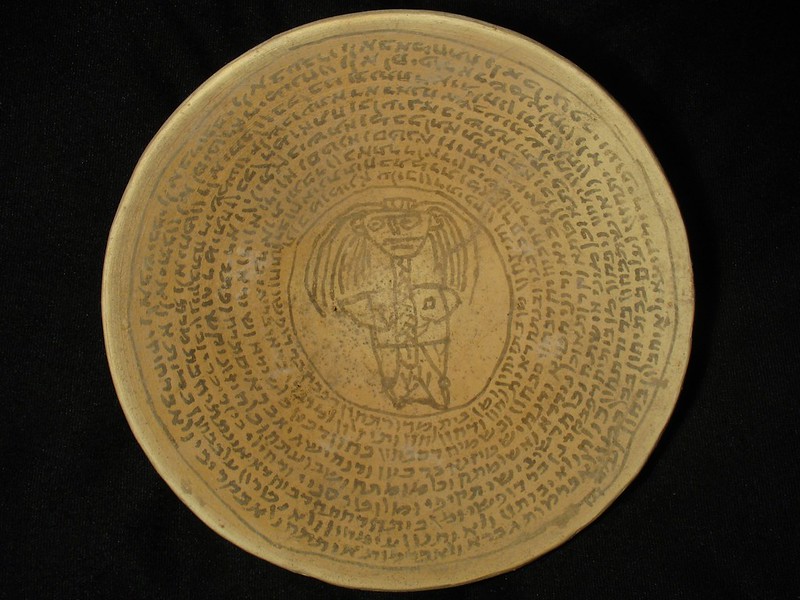 A Babylonian Devil trap is a terracotta bowl inscribed with charms or magical texts to drive away evil. Babylonian Devil traps were common between the third to first centuries b.C.e. and sixth century C.E. They were adopted by captive Hebrews. The bowls were inverted and buried under the four corners of the foundations of houses and buildings.

Their magic was believed to protect against an assortment of evils, including male and female Demons, illness, Curses and the Evil Eye. Some inscriptions invoked God or quoted from Hebrew scriptures. One bowl from the 3rd century b.C.e. proclaims a “bill of divorce” to the Devil and all his night-monsters, ordering them to leave the community.

An incantation bowl is a terra-cotta bowl inscribed with Charms or magical texts, used to trap or drive away Demons. Incantation bowls also are known…

A rabisu is a type of Babylonian Demon who lurks at the thresholds of homes, waiting to attack humans. Rabisu means “the ones that lie…

Devil’s book A black book kept by the Devil listing all persons who have pledged Pacts with him. In accounts of witch trials during the…

A devil fish is a type of ray fish used by Mexican witches (brujas or brujos) in the casting of spells. When dried, the Devil…