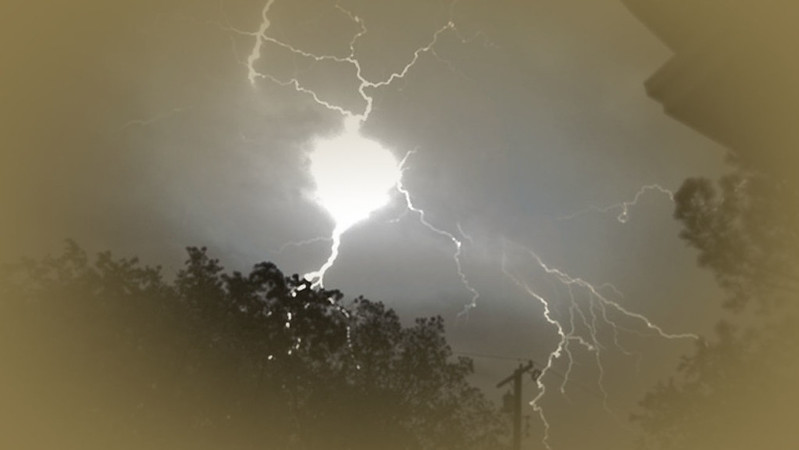 Ball lightning is a ﬂoating ﬁreball in various shades of orange, yellow, red, white, blue, or purple that is said to appear out of nowhere, although usually before, during, or after a thunderstorm. Such balls, which might be anywhere from 2 to 10 inches (5.1 to 25.4cm) in diameter, might exist for less than a minute or for one or two minutes; in general, the brighter they are, the longer they last, and brilliant orange balls tend to last longest. During ball lightning episodes, the ﬁreballs usually move along the ground or ﬂoor, with short periods of vertical lift. When entering or exiting a building, they might travel through a chimney or open window, but sometimes they travel through closed windows or walls (usually nonmetallic). At the end of the episode, most such balls disappear quietly, but sometimes they explode, leaving a sulfurlike smell.

In most reported cases of ball lightning, the balls cause no harm, even when they appear very close to people. In fact, there are many stories of moving balls changing course to avoid people in a room. When a ball explodes, though, people can get hurt. For example, according to one account in a 1945 book called The Elements Rage by Frank Lane, a child who kicked a ﬁreball caused an explosion in which he and a playmate were injured and nearly a dozen nearby cattle were killed. In another incident, an eighteenth-century Russian scientist, G.W. Richman, was attempting to measure a small blue ﬁreball when it exploded in his face and killed him.

It is far more common, though, for ball lightning to destroy property than people. There are many stories of buildings, trees, electrical transformers, and electrical wires being damaged by ﬁreballs, much in the way that other types of lightning strikes damage such objects. In one 1970 incident in Sidmouth, England, a ball explosion impacted the ground rather than any nearby structures but still expelled enough energy to damage more than twenty-ﬁve hundred television sets in the vicinity that were on at the time of the explosion. In an incident in 1984, pilots and passengers on a Russian airliner reported that a glowing ball 4 inches (10.2cm) in diameter appeared outside the plane, disappeared, then reappeared inside the plane, moved rapidly along the ceiling, split into two, merged again, then left the craft through the tail, damaging the metal fusilage. Skeptics, however, say that something else, such as a small object, must have struck the plane to cause such damage.

Since ball lightning leaves nothing behind to prove its existence, skeptics insist that the phenomenon is merely an optical illusion or a hallucination. They do not accept photographs of ball lightning as proof because the image of a bright ball of light can easily be faked. Still, the large number and consistency of ball lightning reports, coupled with the credibility of many of the witnesses involved, has led most physicists and meteorologists to believe that ball lightning is a real phenomenon. They disagree, however, on what causes it. Some scientists theorize that the ﬁreballs are caused by electrical discharges in the atmosphere; others think that the ﬁreballs are created from atmospheric gases that have been electrically charged by a lightning strike. Still others believe that the balls are actually clouds of burning silicon, propelled into the air when the lightning strikes the ground. There are also nonscientiﬁc theories related to the source of ball lightning, most of which suggest that the ﬁreballs are created from energy forces deep within the earth and/or energies drawn from psychic or mystical activities.

A few people attribute ball lightning to supernatural forces, and although this idea is not widely accepted today, centuries ago it was the prevailing view. There were two theories in this regard. The ﬁrst was that a ﬁreball was the essence of a spirit whose appearance was a sign that someone’s death was imminent. Under this theory, ﬁreballs seen near or in a graveyard were said to herald an upcoming burial. The second such theory was that the ﬁreballs were actually fairies. To people who believed in this theory, the idea that the balls were intelligent creatures explained why they seemed careful to avoid hitting the occupants of a room.

The Greenhaven Encyclopedia of Paranormal Phemomena