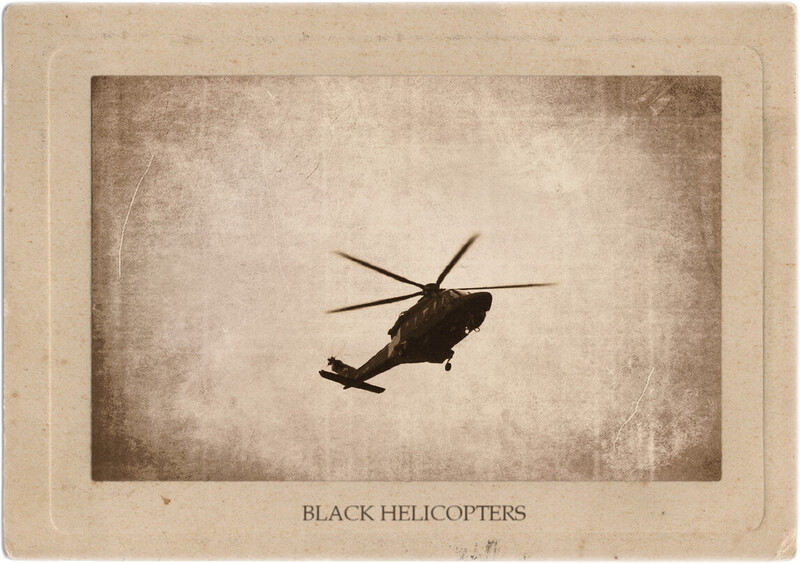 BLACK HELICOPTERS
Since the 1980s,hundreds of men and women have reported being harassed and spied upon by mysterious unmarked black helicopters, which they believe to be the property of a clandestine national police force that will soon begin to wage incessant warfare against all Americans who oppose the secret government.

Many conspiracy theorists believe that individuals who are involved in the investigation of any suspected conspiracy or who are doing serious UFO research are certain to be under surveillance by hovering black helicopters without any identifying markings and flying at unsafe or illegal altitudes. When the Federal Aviation Authority was asked by alarmed citizens’ groups to investigate black helicopter traffic over the United States, the FAA stated that it had no investigations on file.

However, many individuals reported that the FAA did have agents in the field taking depositions from witnesses to the activity of black, unmarked helicopters. The pilots who fly the mystery helicopters, as well as the black-uniformed agents within the craft, are thought to be the minions of the secret government that has signed a document turning over control of our nation’s military forces to greedy and power-hungry international bankers, the Secret Brotherhood of the Illuminati, and their various allies.

In a few ground sightings, the occupants of the helicopters have been described as men wearing black uniforms and carrying automatic weapons. They may shy away if law enforcement officers try to approach, but there are also numerous accounts of aggressive behavior on the part of the helicopter crews. According to some conspiracy researchers, the crews of the black helicopters are veterans of a highly classified CIA project, which involved the training and indoctrination of selected, multiple-personality assassins.

These agents were not only programmed to kill, but after repeated torture and hypnotic brainwashing sessions they were given selective “memories” of new and fictitious lives. Such insidious and reprehensible experiments in mind control were conducted by the CIA in the 1950s and 1960s under the code name MK-ULTRA, and the assassins produced by the program were considered a kind of secret weapon against the Soviet Union.

MK-ULTRA crews aboard the black helicopters are assigned to seek out those researchers and investigators who are becoming too much of an annoyance to the secret government. If these individuals do not desist in their investigations of the international conspiracy headed by the New World Order and the Illuminati,they will be abducted and undergo experiments in biochemical research, psychosurgery,and electrical stimulation of the brain.

After repeated torture and hypnotic brainwashing sessions,they will be given selective “memories” that may include intense recall of UFO sightings and abduction experiences,causing them to be discredited by any civil authorities to whom they might later report their claims of having been abducted by agents of the secret government. Many of the black helicopters patrol the area above underground bases constructed for use by government agencies in the event of nuclear war.

Entities associated with such underground facilities include the Pentagon, CIA, Federal Emergency Management Agency, and National Security Agency. According to some informants, at least ninety-six underground centers have been secretly funded by the U.S. government.

Several people have reported the appearance of unmarked black helicopters, often piloted by men dressed in black clothing— either business suits or flight suits—at sites associated with mysterious government activities as well as at locations where UFOs have been sighted and/or unexplained cattle mutilations have occurred. Consequently, black helicopters are now associated with several conspiracy theories, most notably that the U.S. government is receiving advanced technology from aliens in exchange for helping them conduct experiments on humans and animals. The U.S. government does admit to using unmarked black helicopters for certain operations, but officials say that these aircraft are involved only in exercises and missions related to ordinary military activities.

In 1995, however, Congresswoman Helen Chenoweth, a Republican from Idaho, accused the government of landing unmarked black helicopters on private property in her state as part of its enforcement of the Endangered Species Act. Chenoweth admitted that she herself had never seen the helicopters and was only responding to complaints from constituents—a fact that sceptics have said supports their theory that reports of black helicopters are based on irrational fears of an all-powerful government among a small number of people.