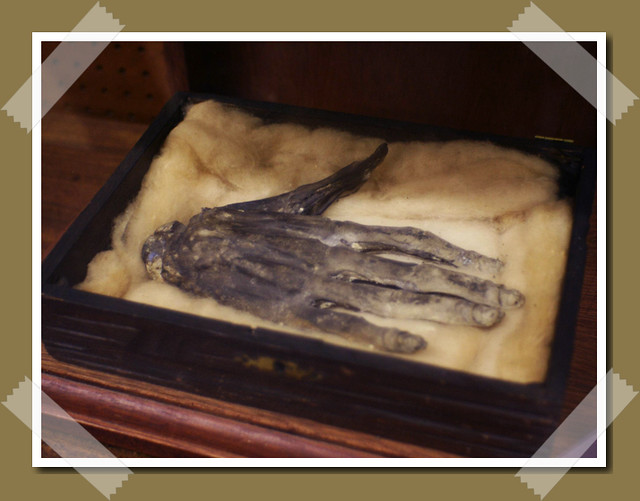 The hand of glory is the severed hand of a hanged murderer, magically preserved, once was used as a Charm in black-magic spells and was believed to aid burglars in breaking into homes and buildings.

The hand of glory was the right hand of a murderer, ideally severed while the corpse still swung from the gallows, or cut during an eclipse of the moon. It was wrapped in a shroud, squeezed of blood and pickled for two weeks in an earthenware jar with salt, long peppers and saltpeter. It was then either dried in an oven with vervain, an herb believed to repel Demons, or laid out to dry in the sun, preferably during the dog days of August.

Once preserved, the hand was fitted with Candles between the fingers. The candles, called “dead man’s
candles,” were made from the murderer’s fat, with the wick being made from his hair. In another method of curing, the hand of glory was bled, dried and dipped in wax, so that the fingers themselves could be lit as candles.

With candles or fingers burning, the hand of glory supposedly had the power to freeze people in their footsteps and render them speechless. Burglars lit hands of glory before breaking into a house, confident that the charm would keep the occupants in a deep sleep while they plundered the household. If the thumb refused to burn, it meant someone in the house was awake and could not be charmed. According to lore, once a hand of glory was lit, nothing but milk could extinguish it.

As a counter-charm, homeowners made ointments from the blood of screech owls, the fat of while hens and the bile of black Cats and smeared it on their thresholds.

Hands of glory were linked to witches during the witch-hunt centuries. In 1588 two German women, Nichel and Bessers, who were accused of witchcraft and the exhumation of corpses, admitted they poisoned helpless people after lighting hands of glory to immobilize them. John Fian, who was severely tortured in his witch trial in Scotland in 1590, confessed to using a hand of glory to break into a church, where he performed a service to the Devil.

hand of glory In European Magic folklore, the severed and preserve hand of a criminal, used in Spell casting. According to lore, the hand of glory renders people afraid and powerless and makes people fall into a deep sleep, thus enabling thieves to break into homes and steal their possessions and money.

The term hand of glory is believed to be derived either from the French main de glorie or mandrogore, or mandrake plant, which is associated with gallows. The hand was linked to witchcraft in trials of accused witches during the Inquisition. Belief in the hand persisted into the 19th century.

Rituals in grimoires for making a hand of glory specifies that the right hand of a murderer should be cut off during an eclipse of the moon. Failing an eclipse—few and far between—one can chop off a murderer’s hand on any night while the corpse still hangs on the gallows.

The hand is wrapped in a piece of the corpse’s burial shroud and squeezed dry of blood. It is then placed in an earthenware pot and pickled for two weeks in a mixture of saltpeter, salt, and peppers. The hand is wrapped in vervain and either dried in the August sun or baked in an oven. The dried hand is either dipped in wax so that the fingers can be burned as candles, or else the hand is fitted with one or more candles placed between the fingers. The candles should be made out of the fat of the hanged man, of another executed murderer, or of a pony, along with sesame and virgin wax. The dead man’s hair or the pony hair is used for the wick.

The hand of glory is burned to cast the sleeping spell. If the thumb does not light, it is a sign that someone in the house cannot be bewitched.

Magical lore holds that the only thing capable of extinguishing a lit hand of glory is milk. The 16thcentury Dutch Jesuit Demonologist Martin Del Rio wrote of the milk remedy in his study of witchcraft, Disquisitionum magicarum libri VI (1599). Del Rio told of a servant girl who discovered a thief breaking into her employer’s home with a hand of glory. She tried to extinguish the candle with water and beer, which failed. Out of desperation, she tried milk, which put out the flame. The bewitched family immediately awoke and caught the thief.

The story probably is based on folk tales which tell of similar circumstances: a servant girl rescuing a household in danger from a thief armed with a hand of glory. In some versions of the tale the girl uses milk, and in others she blows out the candles herself.

A magical antidote to the hand of glory calls for smearing thresholds, chimneys, window sashes, and other potential places of entry with ointments made from the blood of screech owls, the fat of white hens, and the bile of black cats. The ointments would prevent anyone from bewitching occupants with a hand of glory. The hand of glory is similar to other magic lights used by thieves in folklore. See raven stones; thieves’ lights.