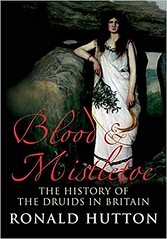 Crushed by the Romans in the first century A.D., the ancient Druids of Britain left almost no reliable evidence behind. Because of this, historian Ronald Hutton shows, succeeding British generations have been free to reimagine, reinterpret, and reinvent the Druids. Hutton’s captivating book is the first to encompass two thousand years of Druid history and to explore the evolution of English, Scottish, and Welsh attitudes toward the forever ambiguous figures of the ancient Celtic world.

Druids have been remembered at different times as patriots, scientists, philosophers, or priests. Sometimes portrayed as corrupt, bloodthirsty, or ignorant, they were also seen as fomenters of rebellion. Hutton charts how the Druids have been written in and out of history, archaeology, and the public consciousness for some 500 years, with particular focus on the romantic period, when Druids completely dominated notions of British prehistory. Sparkling with legends and images, filled with new perspectives on ancient and modern times, this book is a fascinating cultural study of Druids as catalysts in British history.

The Druids have been known and discussed for at least 2400 years, first by Greek writers and later by the Romans, who came in contact…

This is the first survey of religious beliefs in the British Isles from the Old Stone Age to the coming of Christianity, one of the…

Hutton, Ronald – Professor of history at Bristol University in England. Hutton has written a critical history of British paganism (The Pagan Religions of the…

An exploration into the beliefs and origins of the Druids, this book examines the role the Druids may have played in the story of King…