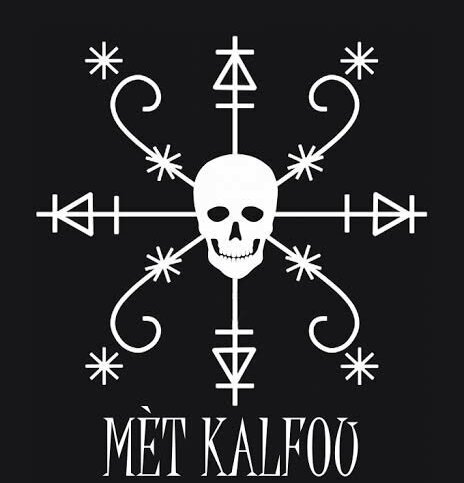 Carrefour, Maitre – Master of the Crossroads Maitre Carrefour, master and guardian of the crossroads, may be the alter ego of Eshu Elegbara, his mirror image, shadow side, or nocturnal counterpart. Eshu Elegbara (Leg ba; Elegba) is a solar spirit. Maitre Carrefour emerges with the moon. Papa Legba is a trickster: Maitre Carrefour is a trickster taken to exponential extremes. Crossroads are places of decisions; the road chosen (or not) can impact one’s entire life. Be careful: crossroads spirits are invoked to point you to the right road or direction. If Maitre Carrefour is feeling tricky, he may point you in the wrong direction or make you lose your way. Crossroads are favourite haunts of witches, spirits, and ghosts: those magical crossroads are under Maitre Carrefour’s jurisdiction. Maitre Carrefour walks the crossroads at night, in the company of malevolent spirits. He is their master and gatekeeper. Maitre Carrefour controls comings and goings of ghosts and malevolent spirits. Carrefour unleashes the secret spirits of the night: he may be petitioned to keep them far from you. He is, however, usually a spirit of last resort. Don’t invoke him until other avenues and attempts have failed. He is a great, powerful, and potentially dangerous spirit: never summon him for trifles. Don’t get too comfortable or familiar with him. He is the master. It is not necessarily to your benefit to attract his attention without very good reason. If you feel you need him, it may be advisable to request the services of a reputable Vodou priest or priestess (houngan; mambo) to intercede for you. Maitre Carrefour is an aggressive, effective spirit. He works quickly, and so devotees love him. There are no Demons that he cannot command. However, he also punishes quickly: he’s not a good-natured, patient spirit. Never promise him what you’re not absolutely certain you can deliver immediately. Maitre Carrefour is not a spirit for beginners. He doesn’t care whether you’re just learning. Pleas for mercy may have little effect. He has a cold nature; hence he can behave cruelly although he does possess a sense of justice. He is not an evil spirit per se but a hardened, tough one. He didn’t get to be master of evil spirits by being nice. He is a brilliant, quick-thinking, tricky spirit: don’t even think of outwitting him. Maitre Carrefour is petitioned to keep malignant spirits, ghosts, and people far from you. He can break hexes, curses, and spells. If sorcerers have set ghosts or spirits after you, Maitre Carrefour can redirect them and prevent them from drawing near. Maitre Carrefour owns the night: there’s little he can’t do. • Maitre Carrefour is the Bizango counterpart to Legba, the first invoked in rituals and ceremonies. • He is syncretized to Saint Andrew, the vampire saint. • Carrefour is sometimes classified among the Barons, in which context he is Baron Carrefour (French) or Bawon Kalfou (Kreyol).

Carrefour is the sun at midnight and the moon to Legba’s noonday sun.

Maitre Carrefour typically has his own altars, not shared with other spirits.

Baron Cimitière is a grand magician, master magus, and healer extraordinaire. He holds court in the cemetery at midnight. He is part of a triad…

Lucero ALSO KNOWN AS: Lucero Mundo (Light of the World); Lubaniba; Nkuyo ORIGIN: Congo CLASSIFICATION: Nkisi Lucero is among the most beloved spirits of the…

Eshu Elegbara : Tree of Justice Eshu Elegbara is the master of the crossroads. He is the lord of communications, guardian of gates. He is…

The Barons Modern Haitian Vodou has two types of spirits of the dead: Gédés and Barons. Boundaries between them are sometimes nebulous, but in general…