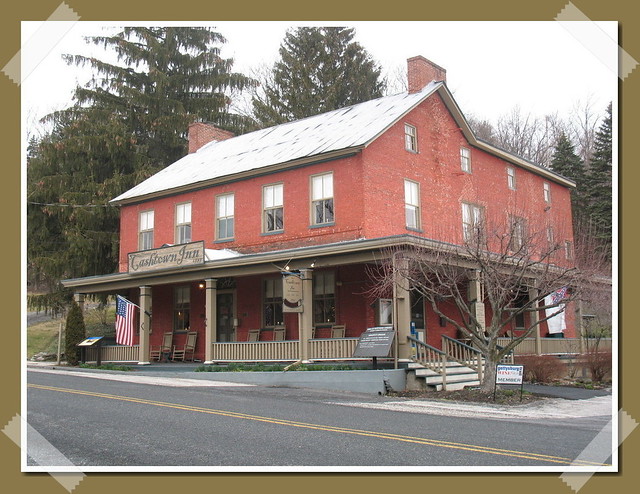 Cashtown Inn is a Eighteenth-century inn located in Gettysburg, Pennsylvania, with a long history of haunting activity, dating to possibly the late 19th century. Modern renovation work has disrupted much of the activity. The inn played a significant role in the battle of Gettysburg in 1863, the turning point of the American Civil War.

The Cashtown Inn was built in 1797 on what is now the Lincoln Highway, the Old Route 30, which passes through the center of Gettysburg. It became known as the Cashtown Inn because the owner would accept only cash for Cashtown Inn 83 food and lodging. The tiny town of Cashtown developed here, about eight miles out from Gettysburg.

In October 1862, the inn was raided by J. E. B. Stuart’s Confederate forces. In the days before and after the battle of Gettysburg (July 1–4, 1863), a large part of the Confederate Army passed through Cashtown. On June 30, 1863, Confederates camped in Cashtown, and officers and aides made the inn their headquarters. Among them was Major General A. P. Hill, who met General Robert E. Lee outside the inn as Lee was on his way to the troops. The Confederates observed Union troops amassing around Gettysburg.

On the night of June 30, Commander Henry Heth asked his commanding officer, General A. P. Hill, for permission to take troops into Gettysburg the next day to look for shoes. Hill agreed. The next day, July 1, marked the start of the great battle.

Stories that the battle was fought over shoes have probably been blown out of proportion. The Confederates had already taken goods from the Gettysburg stores and ordered shoes from nearby York. Most likely, Heth was looking for a way to engage the Union troops in fighting. The intense battle was a Union victory, and turned the tide against the Confederates for the remainder of the war.

The inn survived. In the 20th century, it was a restaurant and dance hall. In the early 1990s, Charles “Bud” and Carolyn Buckley owned it. Dennis and Eileen Hoover purchased it in 1996. It operates as a country inn, with seven guest rooms, a pub, and a restaurant.

The earliest record of eerie presences at Cashtown Inn dates to an 1896 photograph taken of the building from across the street. An “extra” (see Spirit Photography) appears in the photograph: a man wearing what appears to be Confederate army garb, a slouch hat, and an oversized shell jacket worn by the infantry. The figure is blurred, which would have been consistent with 1860s photography technology: subjects had to stand completely still to avoid blurring. A 19th-century man stands in the photo, clear, and seems unaware of the extra.

The Ghost of a man in a Civil War uniform was seen numerous times by a boy who lived in the inn during the late 20th century and by some visitors. Other Apparitions of Confederate soldiers have been seen in the halls and in a doorway that goes behind the bar.

Sounds of horses outside have been heard during the night, and footsteps sound in the attic when no one is there. Room 4 is the most active; visitors have been awakened by knocks on the door during the night, though no one stands outside. A Confederate soldier has appeared in the room. He is believed to be a Civil War soldier who was mortally wounded nearby by a hotel customer just prior to the start of the battle of Gettysburg.

In 1996, logbooks were placed in the guest rooms, and many guests have mentioned ghostly experiences, among them mysterious footsteps, objects being moved to new locations, doors opening and closing by themselves, invisible presences in rooms and felt on the bed, unusual DREAMS, sounds of objects being dropped on the floor, lights going on and off by themselves, and apparitional figures.

Guests also have reported that someone entered their room during the night to unplug their air conditioners and, strangely, to politely pack their suitcases in the morning.

Renovation has been done on the inn, which seems to have disturbed and decreased some of the haunting activity.

Gettysburg battlefield is the site of the turning point of the American Civil War (1861–1865). The three-day battle at Gettysburg, Pennsylvania, was fought July 1–3,…

Antietam battlefield Site of one of the bloodiest battles of the American Civil War (1861–65) at Antietam Creek, near Sharpsburg, Maryland, on September 17, 1862.…

Mark Nesbitt (1949– ) is a Paranormal investigator and author and the recognized leading expert on Ghosts and Hauntings in Gettysburg Battlefield and environs. Mark…