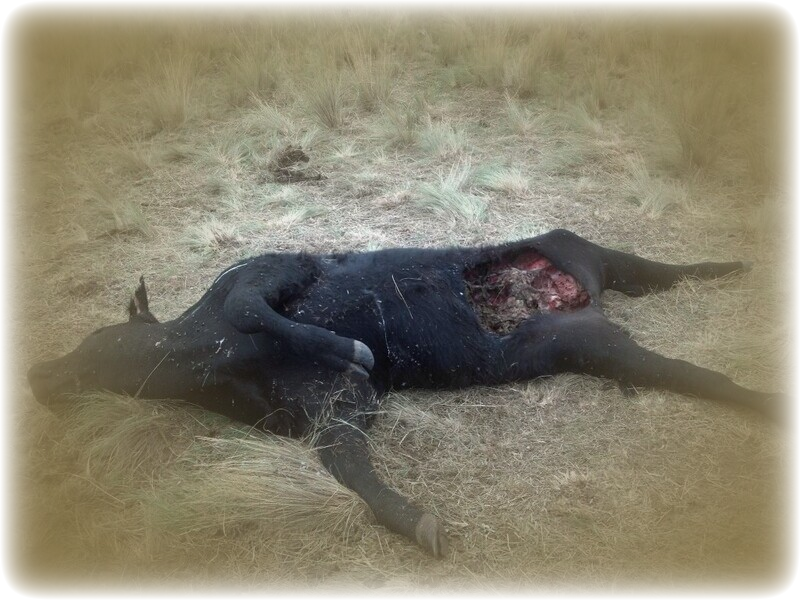 While inspecting their herds of cattle, ranchers and farmers sometimes come across an animal that has died under mysterious circumstances, its body mutilated in strange ways. In most cases, the mutilation (also called cattle ripping) involves the removal of reproductive and digestive organs, sometimes along with an ear, an eye, the lips, and/or the tongue. Those who report such mutilations often say that the cuts appear to have been made with a precision that could not be achieved with any surgical instrument made on Earth. Sometimes the animal’s blood is said to have been drained as well; if so, there are usually two puncture marks on its throat. However, no footprints—human or animal—are found near the body.

Mysterious animal mutilations have been reported since ancient times, when Roman farmers spoke of demons that attacked their livestock. In more recent times, there have been sporadic outbreaks of strange attacks. For example, mysterious sheep slaughters were reported in Ireland in 1874 and in England from 1904 through 1906 and in 1910; horses and cattle were mutilated in the United States from 1966 through 1967; and strange attacks on livestock and domestic animals occurred in Mexico, Puerto Rico, and El Salvador from 1995 through 1996.

Explanations offered for the strange slaughters vary. In Latin American cultures, the killings are blamed on an unidentified creature called a Chupacabra, Spanish for “goat sucker.” In the United States, however, the dominant view has been that intelligent beings are behind animal mutilations. This idea gained prominence in the late 1960s and the 1970s. During this period, by some estimates, more than ten thousand oddly butchered carcasses were discovered across the western half of the country.

One of the best-known cases from this period actually involved a pony rather than a cow, but the pattern was consistent with other animal mutilations. In September 1967 a woman in Alamosa County, Colorado, found her pony dead in a field with pieces of its flesh sliced away, its internal organs removed, and its body drained of blood. There was no blood on the ground and no footprints nearby, even the pony’s. (Its tracks ended approximately 100 feet [30.5m] away.) However, on the ground nearby were fifteen circular marks, as though something had scorched the brush. Since UFOs had recently been reported in the area, many people assumed that the scorch marks had been caused by the landing of an alien spaceship. A few weeks later, eight more animals, both horses and cows, were found mutilated in the same area in much the same way, sometimes only a few hours after ranchers had checked on them.

Another rash of cattle mutilations took place in Kansas and in Pennsylvania in 1967, and from 1975 through 1976 yet another outbreak of cattle mutilations occurred in fourteen states in the Midwest and the West: Montana, Colorado, Texas, Minnesota, Missouri, Illinois, Mississippi, Iowa, Arkansas, Nebraska, New Mexico, Utah, South Dakota, and North Dakota. In the 1980s a third outbreak occurred in Colorado, and in the early 1990s some southern states were affected.

In some of these cases, as with the Colorado pony mutilation, some people had reported spotting UFOs in areas where mutilated cattle were later found. In other cases, however, particularly when the carcasses appeared near military bases and installations, people said they had seen mysterious black helicopters hovering nearby. These helicopters had no identifying markings, but after one such sighting in Colorado, a rancher found a bag with surgical tools that he felt resembled bags issued by government agencies. Though this was never proven, his discovery fueled suspicions that the U.S. government was somehow involved in cattle mutilations.

By the late 1980s this idea had merged with the notion that aliens were mutilating cattle, creating two new theories: that the government and the aliens were working together on experiments involving cattle, or that the aliens were being allowed to remove the animals’ organs in exchange for providing the government with certain goods, medicines, or technologies. By this time, the media had reported on several instances in which people claimed to have been abducted by aliens who then subjected them to odd medical tests. For believers in alien abductions, it was not too far-fetched to imagine aliens conducting experiments on animals as well. Popularizing this theory was a 1980 “documentary” called Strange Harvest, which laid the blame for cattle mutilations squarely on alien invaders.

One particular instance of cattle mutilation has been especially difficult to explain. In 1981 a high-school biology teacher, Iona Hoeppner, came across the carcass of a mutilated calf in Weld County, Colorado. Hoeppner took several samples from the carcass, as well as of the ground around it. Shortly thereafter, most of these samples were stolen from her laboratory, and since by this time government officials were aware of the carcass, some people suspected that the U.S. government was responsible for the theft. However, the thieves had missed two samples: a piece of hide that included an area of incision and a bit of fluid collected from the ground. When Hoeppner examined the fluid, she discovered that it had chemical properties she could not identify, though she could tell that it had the ability to kill germs (and therefore to sterilize wounds and surgical instruments). Hoeppner then considered the incision on the hide and found that, unlike an incision made with a knife, scalpel, or laser, the incision did not cut through the animal’s cells but instead separated the tissue in between each cell, as though pulling them apart. Hoeppner concluded that only someone with access to highly advanced technology could have accomplished this.

Other people who have examined mutilated cattle have made similar claims. For example, in a 1993 case, ufologists determined that the flesh near some of the cuts had been seared, as though with a laser, but that the carbon residue typically associated with laser use was absent. Sceptics, however, reject the idea that the cuts were made by a technologically advanced laser, saying that all such findings are either the result of sloppy work by people inadequately schooled in science and medicine or a tall tale made up for one reason or another.

Skeptics also argue that there would be no need for aliens and/or the U.S. government to mutilate privately-owned cattle since the government has the ability to buy all of the cattle it wants. Sceptics reject the notion that a mysterious government agency has been conducting biological and chemical tests on the animals in any case. Instead, sceptics insist that there are only two possible explanations for cattle mutilations: some of the cattle, they say, were killed by Satanists and/or cultist as part of some religious ritual; the rest died of disease or were killed by predators. Indeed, this was the finding of a 1979–1980 investigation into cattle mutilations that was launched by the state of New Mexico (with the help of federal funding and with the cooperation of nearby states) into cattle mutilations throughout the American West. Investigators concluded that, except for a few instances in which evidence pointed to Satanists and/or cultists, the majority of the mutilations could be attributed to predators, insects, and/or birds.

As to the sudden death of seemingly healthy cattle, the surgical precision of the animals’ wounds, and the fact that only certain organs were removed, sceptics say that natural processes can cause all of these phenomena. A cow with a disease known as lactic acidosis, for example, often shows no symptoms before it dies, and blowflies and other insects, as well as scavengers and predators, usually target the softest parts of a carcass (the very organs
missing from mutilated cattle) and any blood left in the dead animal. Sceptics also contend that the teeth of scavengers and predators can produce cuts that seem as precise as those of a surgical instrument. Believers passionately disagree with such explanations, and arguments over the cause of cattle mutilations continue, as do the mutilations themselves.

The single most notable cryptozoological phenomenon of the past decade is undoubtedly the chupacabras (“Goatsucker”) of Hispanic America. The legend of this livestock-slaughtering monster was…

Ufologists and others who believe that aliens regularly visit Earth say there has been physical evidence of these visits. The evidence they cite includes mysterious…

For 65 years there was a vampiric creature,many say it was a dog, that hunted sheep all over England, Ireland, and Scotland from 1810 to…

Sons of Satan Since at least 1967, reports have surfaced throughout the United States of animals— but, chiefly, cattle slaughtered in bizarre fashion. Organs are…

After a dense snowfall on February 7 and 8, 1855, the people of Devonshire, England awoke to find strange footprints throughout their small town. The…