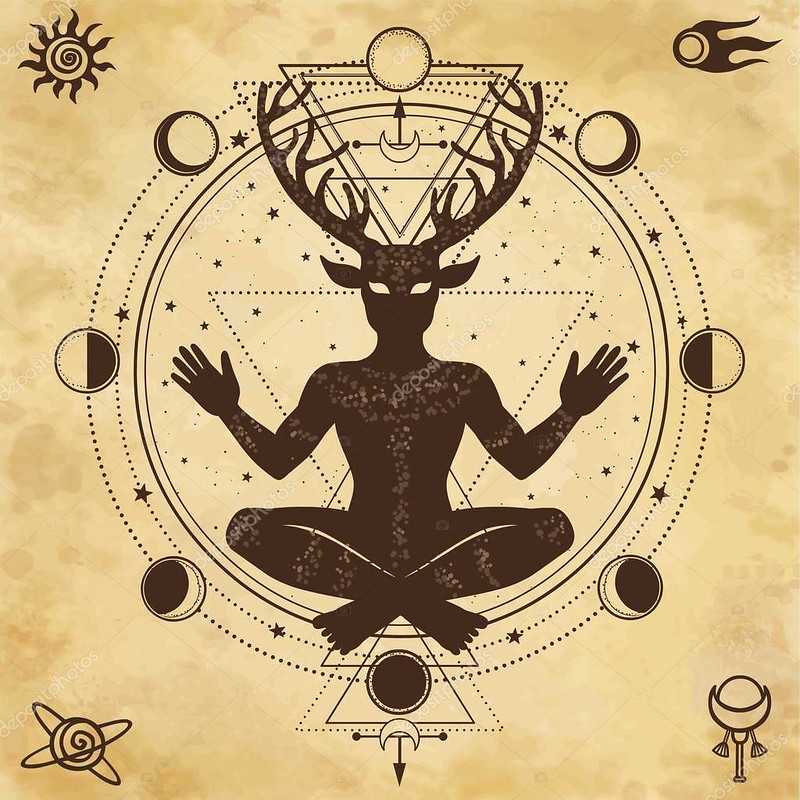 Cernunnos The Horned God of the Celts, associated with the hunt and with fertility. He was sometimes portrayed with serpent’s legs, a man’s torso and the head of a bull or ram; or he was shown with stags or wearing stag antlers. Cernunnos was ruler of the underworld or otherworld, the opener of the gates between life and death. He also was worshiped by the Romans and Gauls, who sometimes portrayed him as triple-headed. The name Cernunnos means simply “the horned.”

The famous Gundestrup cauldron, a large, gilt silver cauldron dated ca. 100 b.C.e. and recovered from a bog near Gundestrup, Denmark, depicts a stag-horned Cernunnos in several scenes: as an antlered man attended by animals, including a boar, and grasping a ram-headed serpent; and grasping a stag in each hand. The cauldron is believed to be Celtic in origin, though some scholars say it is Gallic.

In Wicca and Paganism, the Horned God is often addressed as “Cernunnos” in rituals.

CERNUNNOS : THE HORNED ONE

Cernunnos is the Latin name given this mysterious Celtic deity. Cernunnos is usually translated as “the horned one” and derives from an Indo-European root word ker meaning “growth” or “to become large and hard.” It may be a name, or it may be a title: the word appears on an altar found at Notre Dame together with his image.

On the Gundestrup Cauldron, a highly ornamented silver vessel, discovered in a Danish peat bog in 1891 and dated to the first or second century BCE, Cernunnos sits cross-legged surrounded by forest animals, holding a ram-horned serpent in one hand and a torc in the other. In a relief from Reims, France, Cernunnos sits cross-legged with a stag and bull at his feet. He has a large sack from which he distributes what may be coins or grain.

Cernunnos’ image appears throughout Celtic Europe, from Ireland to Romania. The oldest surviving image is from the fourth-century BCE Italian Alps, which were then Celtic. He remains beloved in the Neo-Pagan community, where he may be associated with the Green Man. Cernunnos has dominion over nature, animals, and abundance. He dispenses and distributes wealth. He is the Lord of Souls, Celtic Lord of the Underworld, the dead, healing, and wealth.

Cernunnos has a man’s body and sports stag’s horns, although this may be shamanic ritual garb. Sometimes his legs are snakes.

Over thirty surviving depictions exist. He is sometimes triple-headed or triple-faced and may be accompanied by a female consort.

Sack filled with treasure; a torc, Celtic emblem of power and nobility