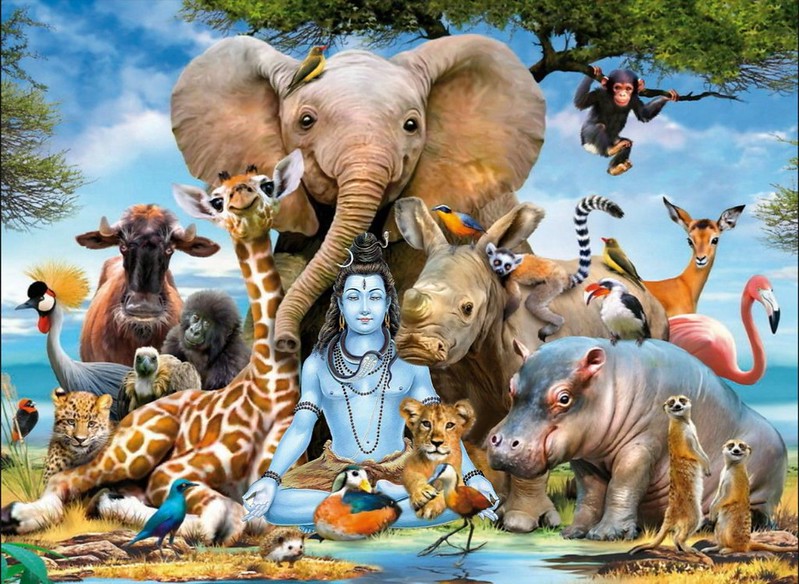 PASHUPATI : LORD OF THE BEASTS

The earliest documented appearance of Pashupati is on a seal from Mohenjo-Daro in the Indus Valley, dated circa 3000 BCE. He is portrayed sitting cross-legged in a yogic posture surrounded by animals. Ancient hunting traditions were closely associated with shamanism. Pashupati is the horned, trance-dancing lord of India’s shamanic hunters. He is the lord of the beasts, guardian of animals’ souls. Pashupati mediates between needs of hunters and animals.

Unlike so many other horned spirits, devotion to Pashupati was never suppressed nor was he Demonized. He remains actively venerated but is now identified as a path or manifestation of Shiva. Once upon a time, Shiva, bored and frustrated with life, decided to go live with the animals in the Katmandu Valley’s Slesmantak Forest, now in modern Nepal. He lived there anonymously for a while, but eventually other spirits (and his wife) came looking for him and his true identity was revealed. Shiva returned to his home and responsibilities but still assumes the guise of Pashupati when the mood hits him.

Pashupati, wearing a high-horned headdress and surrounded by animals— including a bull, rhinoceros, and deer—resembles Cernunnos on the Gundestrap Cauldron.

The region associated with Pashupati remains the holiest Hindu pilgrimage site in Nepal. A temple dedicated to Shiva existed at this site by 879 CE, although the present temple was erected in 1697. The temple is filled with images of Shiva, especially numerous lingams, representing Shiva in his aspect of the divine phallus.