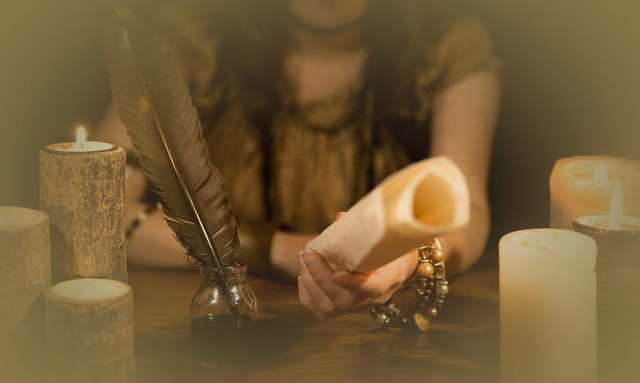 A consecration is a Ritual for making something sacred. In Magic, the Tools and CLOTHING used for a ritual are consecrated prior to use to imbue them with supernatural power. Consecrated objects are used only for ritual purposes and not for everyday tasks. A magician also consecrates himself—an act of purification—prior to ritual.

An Egyptian papyrus from the first century c.e. specifies a ritual for a magician to consecrate himself:

Keep yourself pure for seven days, and then go on the third day of the moon to a place which the receding Nile has just laid bare. Make a fire on two upright bricks with 60 Clavicle of Solomon olive-wood when the sun is half-risen, after having before sunrise circumambulated the altar. But when the sun’s disk is clear above the horizon, decapitate an immaculate, pure white cock, holding it in the crook of your left elbow; circumambulate the latter before sunrise. Hold the cock fast by your knees and decapitate it with no one else holding it. Throw the head into the river, catch the blood in your right hand and drink it up. Put the rest of the body on the burning altar and jump into the river. Dive under in the clothes you are wearing, then stepping backwards climb on the bank. Put on new clothes and go away without turning around. After that take the gall of a raven and rub some of it with the wing of an ibis on your eyes and you will be consecrated.

taste An important element in the success of a magical Ritual. Taste, along with the other senses, must be fully activated to stimulate the MagicIAN’s…

A Kabbalistic Cross is in the magical tradition of the Hermetic Order of the Golden Dawn, a Ritual that is performed at the beginning and…

Oils (also anointing oils) : Perfumed and floral oils have played an important role in magical and religious rites throughout history. Their efficacy is based…