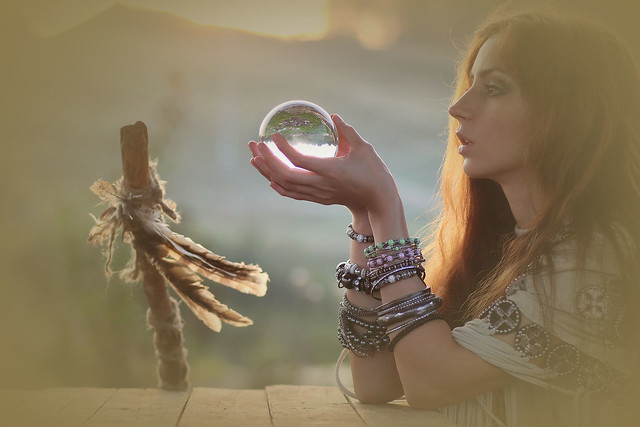 A crystal ball is one of the best-known magical Tools for Divination. The use of a crystal ball for Scrying, the seeing of the future, is called crystallomancy, a method of divination in which shiny and reflective objects reveal images and visions of the future.

The crystal ball has become the stereotyped staple of the fortune-teller from gypsies to sorcerers, wizards, witches, and magicians. According to tradition, the best crystal is natural. Crystal balls made of artificial glass and crystal are widely used in modern times. Glass fishing floats also work.

Magical tradition holds that a crystal ball, like other magical tools and talismans, should be magically empowered. This can be done through magical ritual or by powers endowed by supernatural entities such as angels. For example, the 16th-century scryer John Dee claimed that he was given a crystal by the angel Uriel.

In earlier times, elaborate rituals were performed for scrying with a crystal ball, which would include invoking certain spirits and working only at auspicious times according to astrology or the phases of the moon. Modern practitioners vary in their rituals. At the least, the practitioner alters consciousness to facilitate the appearance of visions and the reception of information. Some may not see actual visions in a crystal but nonetheless receive information. The crystal itself is not considered to hold any magical power but to be a means for the practitioner to access psychic ability.

A crystal ball is used as part of attempts to view images, usually from the future. This act of gazing into a crystal ball or other shiny object, such as a mirror, in order to see things that are not present is called scrying. The user, or scryer, stares into the crystal ball, focusing the mind on the object as a way to eliminate all thoughts. Once this focus is total, images supposedly appear within the ball. Scryers typically say that these images are the result of their own psychic powers, though some say they are sent by deities.

Sceptics dismiss both claims, believing that anyone who seriously claims to see an image in a crystal ball is hallucinating. In most cases, however, skeptics think that the scryer is only pretending to see images in order to dupe people into paying money to hear what these images are and how they might relate to future events. Believers in divination—the ability to predict the future—consider crystal balls, which have been used for centuries, to be a valid tool for activating psychic powers, though other divination tools, such as tarot cards, are currently far more popular than crystal balls.

At the height of the New Age movement, crystals became popular as tools of physical or emotional healing and as devices to influence various aspects… 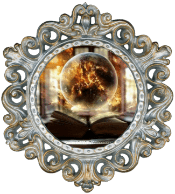 Scrying (also called crystal gazing, crystal seeing, seeing, or peeping) is the ancient act of divination for the purpose of clairvoyance. It is usually achieved…

Gastromancy Gastromancy means either: Divination by looking into large-bellied, bulbous glasses, which is similar to crystal ball gazing. Divination through mysterious voices that are actually…

Crystals are the most delightful magical companions. Their mere presence creates a special ambience wherever they are found. They seem to speak silently of the…