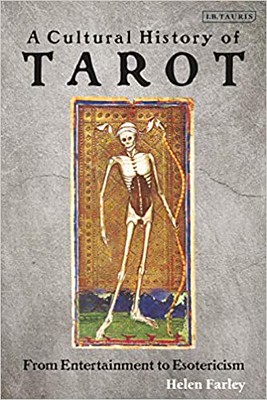 The enigmatic and richly illustrative tarot deck reveals a host of strange and iconic mages, such as The Tower, The Wheel of Fortune, The Hanged Man and The Fool: over which loom the terrifying figures of Death and The Devil. The 21 numbered playing cards of tarot have always exerted strong fascination, way beyond their original purpose, and the multiple resonances of the deck are ubiquitous. From T S Eliot and his ‘wicked pack of cards’ in “The Waste Land” to the psychic divination of Solitaire in Ian Fleming’s “Live and Let Die”; and from the satanic novels of Dennis Wheatley to the deck’s adoption by New Age practitioners, the cards have in modern times become inseparably connected to the occult. They are now viewed as arguably the foremost medium of prophesying and foretelling. Yet, as the author shows, originally the tarot were used as recreational playing cards by the Italian nobility in the Renaissance. It was only much later, in the 18th and 19th centuries, that the deck became associated with esotericism before evolving finally into a diagnostic tool for mind, body and spirit.

This is the first book to explore the remarkably varied ways in which tarot has influenced culture. Tracing the changing patterns of the deck’s use, from game to mysterious oracular device, Helen Farley examines tarot’s emergence in 15th century Milan and discusses its later associations with astrology, kabbalah and the Age of Aquarius.

Tarot cards serve many purposes, and this leads to a variety of Tarot deck styles (circa 500). Some decks exist primarily as artwork; art decks…

Cartomancy is method of fortune-telling or divination using a deck of cards. The most popular form Cartomancy is the Tarot. Etymology From Latin carta, papyrus…

Combining the simplicity of the traditional but little-known Lenormand deck with the familiarity of the tarot, Dunn creates a unique learning format blending these two…

How to Perform a Psychic Reading: A Beginner’s Guide to Reading Tarot Cards is a fun and entertaining book that explores the reader’s natural psychic…