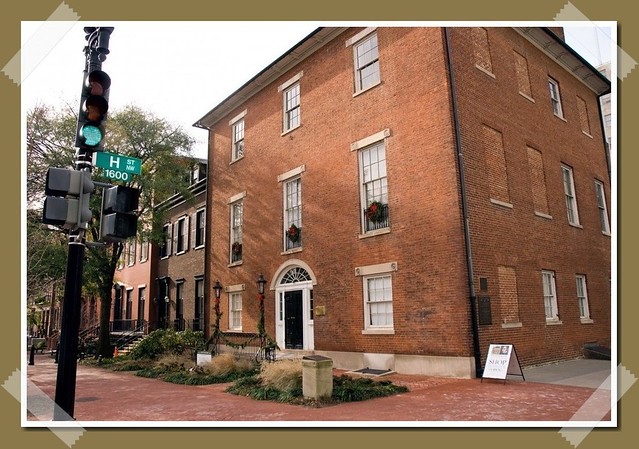 The United States capital has its own blend of haunted history and ghostly manifestations. Many of the apparitions documented here were prominent citizens of the area. Such is the case at the Decatur House, where dark clouds of conflict still hover over this distinguished neoclassical structure.

The Decatur House is located on Lafayette Square just one block north of the White House. The grand mansion was designed by Benjamin Henry Latrobe, often referred to as the father of American architecture. In the 1800s, this area was the heart of the social scene in Washington, D.C. Stephen Decatur and his wife, Susan, enjoyed celebrity status during their lives here—that is, until a violent confrontation ended Decatur’s life abruptly.

The duel between Stephen Decatur and Commodore James Barron is a historical fact. Barron was the commander of the ship the Chesapeake, and had been the subject of a scandal in 1807. According to history, Commodore Barron failed to prepare his ship for battle, and it was easily defeated by a British warship. This incident led to Barron’s court marshal in 1808. Decatur’s naval duty at the time was to attend this court marshal.

Decatur agreed to a verdict that discharged Barron from the Navy for a period of five years. This action led to a 13-year dispute between the two that eventually ended in death.

A letter written by Barron to Decatur stated: “You have hunted me out, have persecuted me with all the power and influence of your office; and for what purpose or from what other motive than to obtain my rank.” He then requested that their dispute be settled by a duel. “If we fight, it must be of your seeking,” replied Decatur, in a letter addressed to Barron.

Barron responded with this statement: “Whenever you will consent to meet me on fair and equal grounds, that is, such as two honorable men may consider just and proper, you are to view this as that call.”

On March 22, 1820, Stephen Decatur and James Barron met on the dueling ground in Bladensburg, Maryland. The duel that followed mortally wounded the Naval hero, Decatur. The nation mourned.

The night before the duel, Stephen Decatur stood at his window silently peering out. After his death, he was spotted so many times by onlookers at this window that it was eventually walled up.

Decatur’s wife, Susan, also haunts the residence. So upset was she when her husband died that, to this day, you can still feel a sense of sadness in the air when you enter the house, and you can hear the sound of her desperate cries.

Decatur House The haunted home of one of America’s great military heroes, Stephen Decatur, and his wife, Susan. Located in the once-fashionable Lafayette Square in the heart of Washington, D.C., the box-shaped house is said to be haunted by the ghosts of both husband and wife, as the result of Decatur’s tragic death by duel.

Stephen Decatur hailed from a family of Maryland seafarers and distinguished himself in the American navy. In 1803, he was given command of his first ship, and he earned fame for his exploits at sea. He married the beautiful Susan Wheeler, daughter of the mayor of Norfolk, Virginia.

The seeds of his death were sown in 1807, by the actions of Commodore James Barron, the commander of the U.S. frigate Chesapeake. At that time, provocative confrontations still occurred between American and British ships, the result of lingering hostility from the War of Independence. In one such incident, the British frigate Leopold fired a shot across the bow of the Chesapeake. Barron seized the opportunity to board the Leopold and take into custody four sailors whom the British charged were deserters. Barron was court-martialed for not securing permission for such action. Decatur was a member of the naval commission that voted to suspend Barron for five years. The incident was instrumental in the outbreak of the War of 1812. While Barron sat out the war on the sidelines, Decatur, named the new commander of the Chesapeake, went on to greater glory.

Following the end of the war, the Decaturs moved to Washington, where they basked in the admiration of the capital’s high society. Their Lafayette Square house, designed by the prominent architect Benjamin Latrobe, was the setting of elegant parties. Barron, meanwhile, nursed an increasing hatred of Decatur. He was reinstated in the navy at half-pay, and was always passed over for promotion. He was not given another ship to command. He mounted numerous personal attacks on Decatur, until the latter was reluctantly pressed into a duel.

The Decaturs hosted a party in their home on March 13, 1820, the eve of the duel. Decatur was said to be depressed, as though he sensed his imminent death. From his first-floor bedroom window, he stared out gloomily over his estate.

The next morning, he arose before dawn and went with his friend, William Bainbridge, to the appointed dueling place, a field near Bladensburg, Maryland. Pacing off, Decatur and Barron fired almost simultaneously at the count of two. Barron fell first, wounded in the hip; then Decatur fell, mortally wounded in the right side. Decatur was an excellent shot, and it is said that he deliberately avoided killing Barron; perhaps he believed the other would only wound him as well.

Decatur was taken back to his home to die. Susan was so distraught that she could not bring herself to look at him. His burial with full military honors did nothing to assuage her profound grief, and she could not stand to remain in the house where they had been so happy together.

A year after Decatur’s death, his APPARITION was seen late one night, looking out sadly from the bedroom window where he had stood on the eve of his death. The window was walled up, but the Ghost continued to return, as though it was loathe to be separated from the elegant house and grounds. The ghost sometimes was reported slipping out the back door early in the morning, black box under one arm, just as Decatur had done on the morning of the fateful duel. In addition, sounds of a woman weeping— said to be the ghost of Susan Decatur— have been heard in the house.

Decatur House is now a museum.

Back to Haunted Washington D.C.