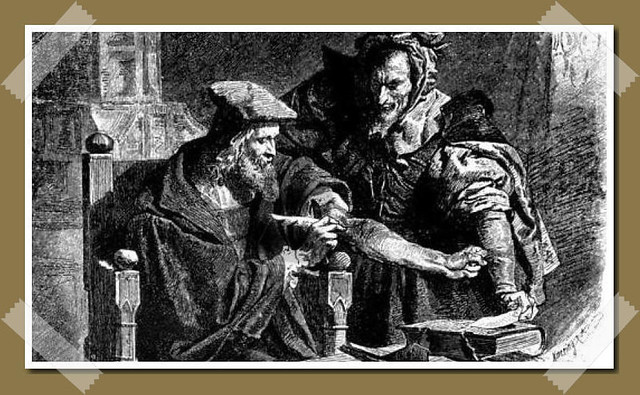 Faust
Legend of a learned but arrogant man who makes a Pact with the Devil. The Faust legend was based on the legend of THEOPHILUS and circulated widely in Europe in medieval times. It was published as a novel in the mid-1500s after the Protestant Reformation. The best-known version of the story was published in 1587 by a German publisher, Johann Spies. Translated into English by 1594, the manuscript inspired Christopher Marlowe to write his play, The Tragicall History of D. Faustus, around 1601. In the late 18th century, Johann Wolfgang von Goethe wrote his version of Faust.

The Early Story of Faust
Faust, the son of a husbandman, was born in Roda, Weimar, Germany. He was raised in a Christian household. Faust had a superior intellect and earned a doctorate in theology. But he was vain and arrogant. He indulged in gluttony and lust.

Faust began dabbling in Magic. One night, he went to a Crossroads in the woods, cast a magic circle, and conjured the Devil. The Devil appeared as a griffon or dragon, then as flying lights, then as a burning man, and finally as a gray friar who asked Faust what he wanted. Faust compelled him to agree to go to his house the next morning. By evening, Faust agreed to a pact presented by the Devil. He agreed to three things:
• Faust would become the Devil’s property after a certain number of years.
• He would sign an agreement to this effect in his own Blood.
• He would renounce the Christian faith and defy all believers.
In exchange, the Devil would fulfill every lust of Faust’s heart and grant him the body and powers of a spirit. In his arrogance, Faust thought the Devil might not be as bad as others said.
The Devil revealed his name as Mephostophiles (MEPHISTOPHELES).
Faust gave him the following written pact:
I, JOHANN FAUSTUS, Dr.,
Do publicly declare with mine own hand in covenant & by power of these presents:
Whereas, mine own spiritual faculties having been exhaustively explored (including the gifts dispensed from above and graciously imparted to me), I still cannot comprehend;
And whereas, it being my wish to probe further into the matter, I do propose to speculate upon the Elementa;
And whereas mankind doth not teach such things;

Now therefore have I summoned the spirit who calleth himself Mephostophiles, a servant of the Hellish Prince in Orient, charged with informing and instructing me, and agreeing against a promissory instrument hereby transferred unto him to be subservient and obedient to me in all things.

I do promise him in return that, when I be fully sated of that which I desire of him, twenty-four years also being past, ended and expired, he may at such a time and in whatever manner or wise pleaseth him order, ordain, reign, rule and possess all that may be mine: body, property, flesh, blood, etc., herewith duly bound over in eternity and surrendered by covenant in mine own hand by authority and power of these presents, as well as of my mind, brain, intent, blood and will. I do now defy all living beings, all the Heavenly Host and all mankind, and this must be.
In confirmation and contract whereof I have drawn out mine own blood for certification in lieu of a seal.
Doctor Faustus, Adept in the Elementa and in Church Doctrine.

Thus began Faust’s relationship with Mephostophiles, whom he conjured daily inside his locked study. The Demon always appeared in the guise of a friar. Mephostophiles indulged Faust with the finest foods and then an endless supply of women.

Faust also plied the Demon with questions about the formation of the world, heaven and Hell, and how the ranks of Demons came into being as a result of the fall of Lucifer.

After nearly eight years had passed, Faust one day ordered Mephostophiles to summon his lord, Belial, but BEELZUBUB appeared instead. Faust asked to be taken on a tour of hell. Beelzebub returned with a bone chair and whisked Faust away.

It seemed Faust fell asleep, and when he awakened, he was in the abyss, which was full of contorted animals, sulfuric stenches, quakes, lightning, flames, and tremendous heat. He also saw many well-known people, including royalty, suffering in the heat. Faust was returned to his own bed, but he was certain he could not withstand hell himself.

Faust then desired to see the heavens, and a coach drawn by two dragons appeared and took him up into the sky, 47 miles up. He looked down upon the earth, and then he was taken into heaven.

In his 16th year of bondage to the Devil, Faust undertook a pilgrimage to Rome, where he had dinner with the pope and stole his goblets and flagons. He then went to Constantinople and visited the Turkish emperor. Faust had other adventures, including meeting Emperor Charles V and the duke of Bavaria. Faust entertained a group of students by having Mephostophiles conjure up Helen of Troy.

After Faust had spent 19 years with the Devil, an old man tried to persuade Faust to repent and return to Christianity, but Faust renewed his Demonic pact by writing another one in his own blood. He affirmed that in another five years, Lucifer would have full sway over him.

Faust had Helen summoned again and began living with her. In the 23rd year of his pact, she became pregnant and bore a son, whom Faust named Justus Faustus. When Faust’s 24 years were nearly up, he made out a will. As his end approached, he became depressed and fearful of his fate. He regretted his pact. He summoned his students for a final night of dining and company at a village inn and urged them all to follow a good life. That night between midnight and one o’clock, a great storm arose. A hideous music filled the inn, along with Faust’s cries. The students were too frightened to look into his room.

The next morning, Faust was gone. But a hideous sight greeted the students:
The parlor was full of blood. Brain clave unto the walls where the Fiend had dashed him from one to the other. Here lay his eyes, here a few teeth. O it was a hideous spectaculum. Then began the students to bewail and beweep him, seeking him in many places. When they came out to the dung heap, here they found his corpse. It was monstrous to behold, for head and limbs were still twitching.
Helen and Justus were missing, never to be seen again.

The students obtained permission to bury Faust’s remains in the village. They discovered Faust’s written record of all that had happened to him—a sober lesson in the consequences of dallying with the Devil. The story of Faust had different versions and grew in length as time went on. For Faust, there is no redemption; once the Demonic pact is made, the price of it must be paid. Other stories of Demonic pacts allowed for repentance and redemption, specifically through the intervention of the Blessed Virgin Mary (see MARY OF NEMEGEN).
Goethe’s Faust

Goethe began Faust in 1774 and worked on it for 60 years, leaving parts of it to be opened posthumously. The story is of a genius who sells his soul to the Devil, then sins, repents, dies, and is redeemed. Faust is an aspect of Goethe himself and shows Goethe’s knowledge of religion and alchemy and his mystical speculations.

The Prologue in Heaven was probably influenced by Goethe’s reading of Paradise Lost by John Milton. It presents God with the archangels Michael, Raphael, and Gabriel. Mephistopheles, the Devil, enters as a court jester and asks God about mankind’s wretchedness. God mentions Faust, “my serf,” and agrees to let Mephistopheles try to sway him. Faust is “doctor” of all knowledge of all the realms, but he has no solace. He projects a noble aspiration of the human spirit, despite his sinister side. He serves as the focal point for the struggle between good and evil as a necessary part of evolution. In Goethe’s view, the seeds of good can lie hidden in evil, but at the same time, there can be something satanic in the loftiest feeling or the satanic can even grow out of it.

In part 1, Faust is in despair with weariness and emptiness. He deplores the limitations of book learning and decides to seek real power through magic, but both his immense knowledge and magical power have been rebuffed by the Earth Spirit, the lesser deity that dwells in the earth. He is miffed that he, “godhead’s likeness,” “more than cherub,” has been “withered” by the Earth Spirit’s rejection. Faust is about to commit suicide when Easter bells and a chorus of Angels interrupt him. Mephistopheles— a symbol of the libido’s greed for gold and lust—arrives on the scene with attendant spirits he calls “my airy Cherubim.” The seduction of Faust through his limitations begins, and Faust sells him his soul. His youthful vigor restored by a witch, he descends into sensuality, which destroys Gretchen, an innocent woman who loves him. Faust attends a witches’ sabbat. He watches Gretchen die and prays to the heavenly hosts for protection. A heavenly voice proclaims she is redeemed while Mephistopheles insists she is damned.

As part 2 opens, it seems lifetimes later. Faust wakes in a charming landscape with Fairies and Ariel (the same spirit of the air from Shakespeare’s play). Mephistopheles next takes Faust to Greece for an inside view of an emperor, lovemaking with Helen of Troy, and frolic among the gods, satyrs, fauns, and nymphs. His steady movement to damnation contrasts with the glories of knowledge and sensuality. After Faust dies, he is buried by angels and Demons.

In act 5 of part 2, the heavenly angels confront Mephistopheles and his devils to seize Faust’s soul and carry it off. In the epilogue, male and female saints and blessed children sing of God’s plan as the ranks of angels comment on the ascent of Faust’s immortal essence. Gretchen is heard among the chorus of penitent women, and Faust’s soul is received by a Sophia-like “Woman Eternal.”