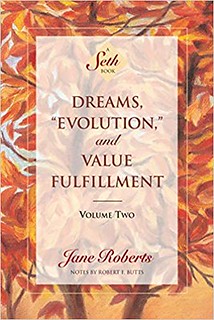 In the first volume of Dreams, “Evolution,” and Value Fulfillment, Seth presented an in-depth picture of the origin of all life — from the inner dream world to the vast display of material creation. Here, in Volume Two, Seth continues his explanation of the physical world as an ongoing self-creation — a direct and intentional outgrowth of the wisdom of the life forms that inhabit it, including humanity. He expands upon his vision of a thoroughly animate universe, where virtually every possibility not only exists, but is constantly encouraged to achieve its highest potential.

In his typical awe-inspiring manner, Seth sheds light on many controversial and complex subjects, including:

• The ways in which our religions have stifled the human spirit
• Surprising insight into life’s meaning and purpose
• The genetic basis of faith, hope, and charity
• The pursuit of pleasure as a fundamental human need
• How each species keeps millions of characteristics within its genetic bank for various contingencies

Dreams are mental work and play combined, psychic and emotionally rich creative dramas. They also involve you in the most productive of enterprises as you begin to play with versions of events that are being considered for physical actualization . . . — Jane Roberts, Speaking for Seth

In this first volume of Dreams, “Evolution,” and Value Fulfillment, Seth takes us on an odyssey to identify the origins of our universe and our…

This extraordinary book is powerfully offered by a group of teachers who call themselves Abraham. They express clearly and simply the laws of the universe,…

There is an old expression about the eye telling all, which relates to the ability of others to recognize or sense when someone else is…

Ancient Egyptian Religion and Magick gifted humanity with foundations of understanding and controlling forces within the mind, body and spirit of the living with the…