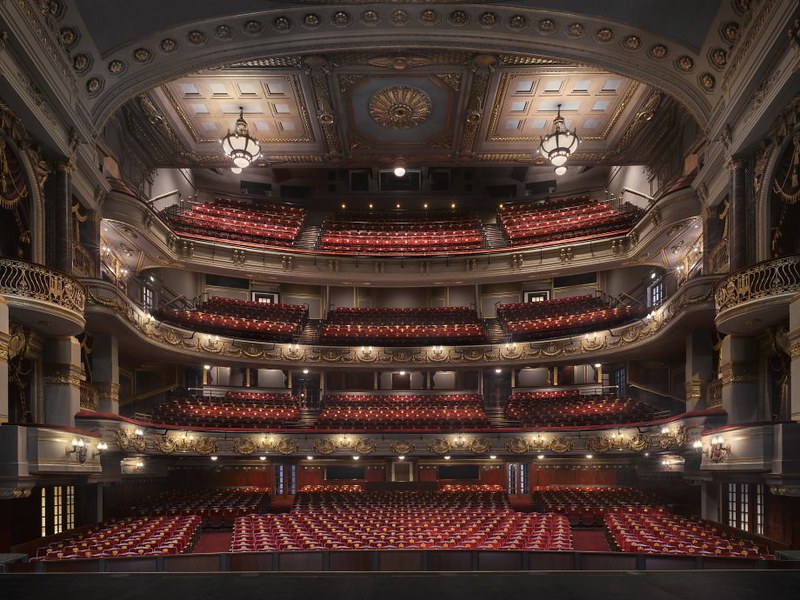 The Theatre Royal, Drury Lane, is the oldest theatre site in London (save the rebuilt Globe), the original theatre having been built in 1663. It has a long history packed with intrigue, romance and murder, and there have been numerous sightings of ghosts.

King Charles II, who gave the theatre its Royal Charter, is said to visit now and again, but the theatre’s most famous ghost is the Man in Grey, so named for his eighteenth-century long grey coat, tricorn hat, powdered wig and sword. He is said to come and watch the play from the balcony, where he slowly walks from one end to the other only to disappear into the wall. He is often seen at rehearsals and his presence is considered very lucky when he appears during rehearsal the play tends to be successful.

Another ghost is thought to be that of twentieth-century comedian Dan Leno. Leno’s ghost has allegedly been spotted in the dressing room he used last before his death.

The Theatre Royal is the haunt of what is probably Britain’s most famous ‘theatre ghost’, the Man in Grey, who can be seen sitting in a particular seat in the upper circle (always at a matinée); he then rises and walks calmly along the gangway behind the seats until he melts into the wall at a certain spot, and disappears. He wears old-fashioned clothing: powdered hair (or a wig), a grey riding-cloak, boots, and a three-cornered hat. Legend claims that he was a wealthy young man of the early eighteenth century who was having an affair with one of the actresses, whom he used to meet in the upper circle after the performances ended – until the day that a rival stabbed him there, as he waited for her. The murderer then hid the body in the recess of a nearby passage, which he walled up. This tale was prompted by the discovery of a skeleton with a dagger in its ribs, found bricked up in the thickness of a wall abutting on the upper circle when the theatre was undergoing alterations in 1848.

The Man in Grey is regarded by theatre folk as a good omen, whose apparition guarantees that the play then in rehearsal or production will be successful. There are numerous accounts of actors and theatre staff who have seen him.

Princess Theatre is a large theatre sitting in the Victoria capital of Melbourne. Built in 1864 by actor Charles Coppin, it is often seen as…

“Theater people” are a very special breed. While some people only devote themselves to an occasional production, others make it their life. And in some…

Adelphi Theatre London theater said to be haunted by the ghost of William Terriss, a popular Victorian actor who was murdered there by a jealous…

Like many old theatres, the Rogers Theatre is no exception when it comes to claims of it being haunted. The theatre has been the site…