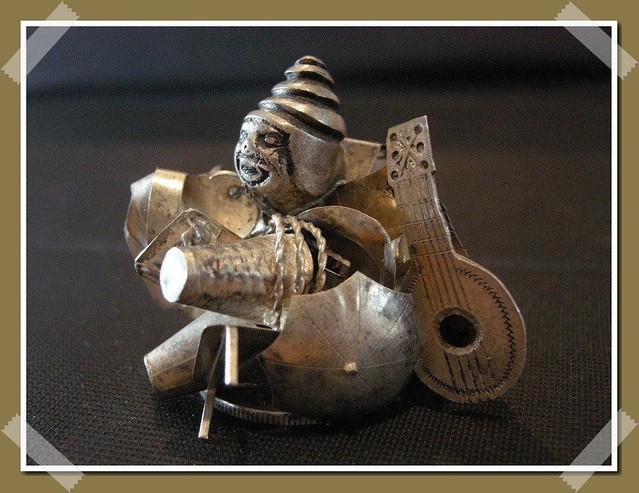 Ekeko, spirit of joy, abundance, and good luck, was born in the Andes but has now traveled all over the world. Ekeko, Lord of Abundance, is originally from Bolivia. His traditional image serves as a talisman to attract luck, wealth, and fertility. Since the 1970s, Ekeko has been venerated worldwide. Place Ekeko’s image in the bedroom to preside over sexual activity. That is, unless you don’t want children.

Ekeko is depicted as a jovial rotund man dressed in traditional Aymara clothing. He is covered with tiny charms representing whatever he is expected to bring: moneybags; food; grain; animals; babies; household appliances and utensils; you name it.

The Alaska, originally celebrated near the Summer Solstice, is now held from the last week of January to the first week of February. Devotees petition Ekeko by building miniature houses in which they place tiny animals, tools, furniture, clothing, and babies, representing needs and desires for the coming year. Ekeko is expected to provide the genuine article prior to the next fair. Vendors sell a variety of tiny images at the fair.

There’s a place for a cigarette to be inserted on many Ekeko statues (although not all). This cigarette is not only an offering but a communication device and oracle: Light the cigarette and insert it into the statue; then watch the smoke. If it resembles an actual exhalation, that’s Ekeko’s signal that your petition has been accepted and your wish will be fulfilled.

A bit of whatever you are hoping to receive from him. This can be the actual article (small cash bills if you’re hoping for a larger payoff) or miniature representations: tiny doll babies if you seek fertility, for instance. Ekeko statues are now sometimes designed to hold a cigarette, similar to statues of Maximon. Other traditional offerings include Coca-cola or coca leaves.